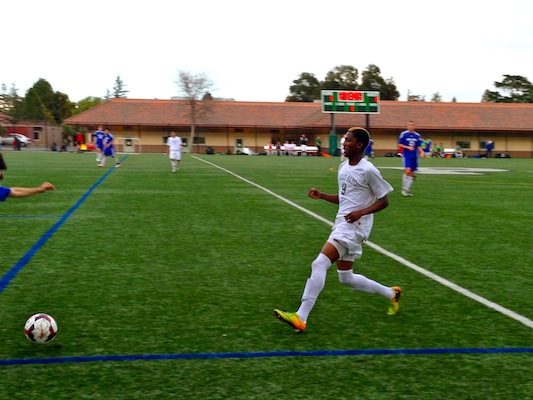 Dami Bolarinwa (‘16) chases after the ball. The Vikings tied 1-1 against the Los Altos Eagles.

The Palo Alto Vikings’ boys’ soccer team tied 1-1 against the the Los Altos Eagles on Wednesday, January 29 in a closely matched game.

The fast paced first half began with the Vikings and the Eagles playing to each other’s strengths. The Vikings’ forceful defense kept the Eagles at bay for the first 20 minutes. Many turn-overs filled the first half leaving both teams unable to successfully complete their passes and intended goals.

The first half ended with the Vikings and the Eagles tied 1-1.

The second half started off slow with many turnovers and failed counter attacks. The Eagles started the second half off strong, applying strong defense against the Vikings. Goalie Tony Maharaj (’14)  made several crucial blocks against the Eagles to keep the score tied at 1-1. Dami Bolarinwa (‘16), an outside midfielder, was injured with ten minutes left in the second half and was forced to leave the game. However, he was able to recover and return to play for the final five minutes of the game. The game ended with the score remaining tied at 1-1.

“They actually played really well. The second half was probably the best we’ve ever played. It was just unlucky that we couldn’t finish and that has been our problem all season. We really haven’t scored many goals, its just been 1-1 and 1-0. Its just been unlucky,” Malekpour said.

Bolarinwa agrees with Malekpour and thinks that the team needs to step up their playing.

“Its not what we can improve on. Its just that we have to start playing like we want to win, ” Bolarinwa said. “The game is there to win; were just too lazy to step up. This was a team we could easily beat, we just let them play around and we didn’t start until we were down 1-0”.

The Vikings will play next on Friday, January 31st against Santa Clara at home.