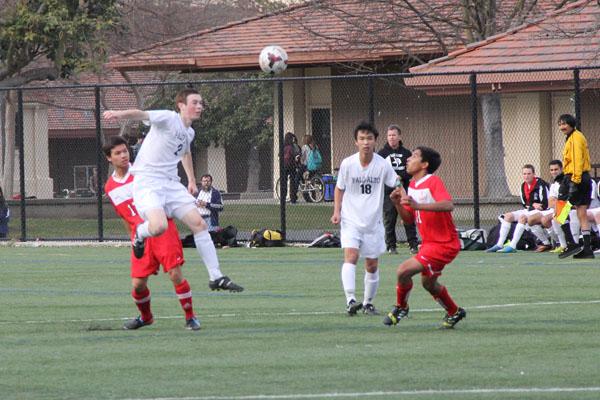 Jack Brooke (’15) goes up for a header against the Saratoga Falcons. The Vikings would go on to win 4-0.

The Palo Alto High School boys’ varsity soccer team won against Saratoga 4-0, despite the aggressive and physical play of the visitors Wednesday night.

The Vikings started the first half on the front foot, with forward Dami Bolarinwa (‘16) turning and crossing to his incoming strike partner Fernando Rodriguez

(‘15) who was unable to direct his header to anywhere but the opposition goalkeeper.

Bolarinwa played receiver in the next play, receiving a low cross from captain Wesley Woo (‘15) and shooting straight at the goalkeeper.

The mounting pressure on the Falcons led to many aggressive tackles. Despite the protests of the Vikings, few fouls were given out in the first half.

In one of the rare moments of refereeing, a yellow card was given to a Saratoga player after he grabbed substitute Edward Chen (‘15) by the neck and threw him to the ground.

The Paly midfield was particularly instrumental in the pressure, with Preston Kuppe (‘15) and Woo dictating the play from the center of the field and sending long balls over the top to Bolarinwa, Rodriguez and captain Cina Vazir (‘14).

Assistant coach Amir Malekpour (‘13) believed the goal was a necessary boost that helped the Vikings win the game.

“The best time to score is right before the half,” Malekpour said. “It brings the mentality of the other team down, it’s a good way to go into the second half.”

Kuppe thought that Palo Alto still needed to press on and go for the second goal.

“This season, we tend to have a history of winning with two goals at the half and going on to lose the game,” Kuppe said. “So we weren’t very comfortable going into the second half.”

The second half started the way first finished, with the Vikings pressing on the Falcons defence. Vazir and Kuppe both had shots just go wide and it was a sign of things to come from the home team.

The second goal of the game came from substitute winger Cole Tierney (‘16). Kuppe was again at the heart of the play, dishing the ball out to Tierney on the wing. Tierney then seemed to attempt to cross the ball, but it floated over the goalkeeper’s head to extend the Viking’s lead.

Malekpour believed it was the goal of the game.

“[The goal] was pretty sweet,” Malekpour said. “I would have to give a lot of credit to Preston for the goal.”

Bolarinwa then scored the last two goals of the game. First, after receiving a through ball from the midfield, he finished past the goalkeeper. He then received a drop-back pass from substitute leftback Steven Blatman (‘15) and finished in the upper-left hand corner.

It was a much needed win for Palo Alto and Woo believed there were plenty of positives to take away from the game.

“We were great with balls over the top,” Woo said. “With fast forwards like Dami and Edward and remained solid defensively.”

The Vikings’ next game will be on Friday, February 7th, at Mountain View at 3:30.