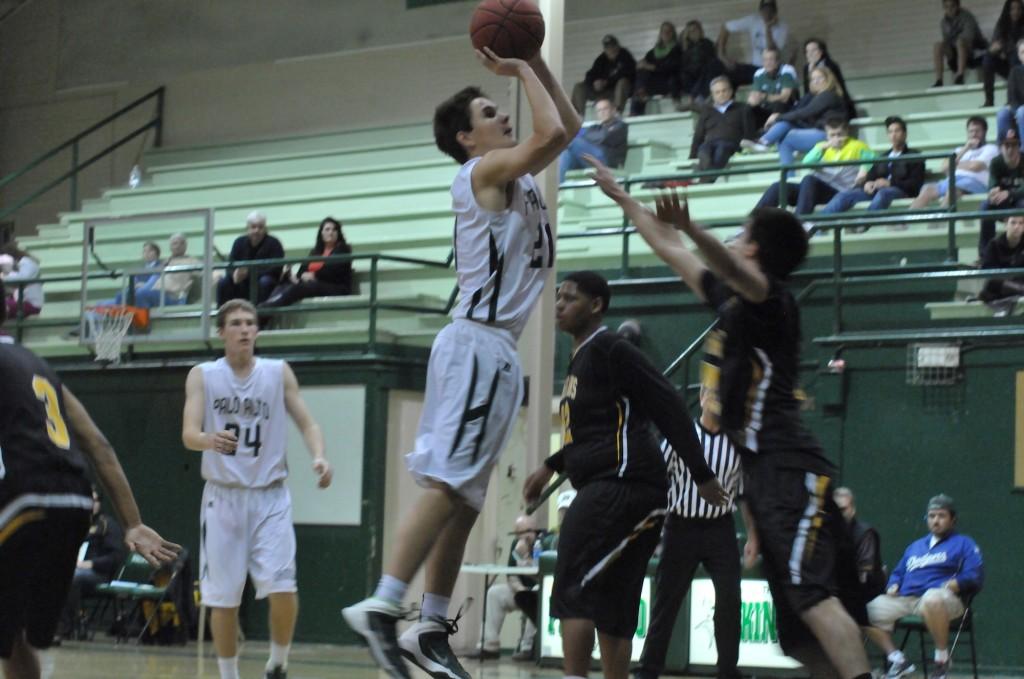 Kevin Mullin ('15) puts up a shot. Mullin contributed 28 points to the Vikings' 47-35 defeat of the Mountain View Spartans.

Friday night, the boys’ basketball team defeated the Mountain View Spartans 47-35 after a hard fought battle. The Vikings were led by point guard Kevin Mullin (‘15) who had 28 points during the game.

“[The team] was led by Kevin Mullin with 28 points,” coach Erik Olah said. “[His performance] was huge.”

Mullin was enthusiastic about his game, but was more focussed on the team’s performance.

“I feel good about [my performance], but it is more about how the team played together and won,” Mullin said.

Team captain Clark Schmutz (‘14) added to Paly’s lead with two points to bring the score to 6-3. With nine points by Mullin and eight points from the Spartans, the quarter ended with Paly leading 15-11.

The second quarter started off slower than the first, with the scoring starting with a free throw made by Justin Hull (‘16). Hull’s point was followed by a three pointer by Mountain View with just over five minutes left in the quarter. The Spartans then scored on one of their own free throws to bring the score to a close 16-15.

Mullin continued his scoring in the second by earning his team five points to challenge the seven points Mountain View put up in the last two minutes of the quarter. The half ended with captain Noah Phillips (‘14) making both of his two free throws to keep the Vikings in a slight lead with a score of 23-22.

The third quarter started off well for the Vikings as Mullin put up another deep three point shot. After a Spartan’s basket, Schmutz and Mullin both found the net again scoring two and three points, respectively. Mountain View then found the basket again with another two points to bring the score to 31-26.

Following Mountain View’s basket, Johnson, Phillips and Mullin all scored two points each to increase the Vikings’ lead. The Spartans finished off the quarter with a three-point shot to bring the score to 37-29 going in to the fourth quarter.

The Vikings were very positive about this win and reflected upon their previous match-up with the Spartans.

“It was a big win, considering they beat us last time and shut us down, we couldn’t score at all at Mountain View,” Olah said.

The Vikings look at this win as an opportunity for the future and are focussing on their upcoming games.

“This win was important for us because now we have a chance to win the league,” Mullin said. “We now have to start thinking about Homestead because they have some really good players, we will have to prepare for them in the next few practices.”

The Vikings will play next at Homestead High School on Wednesday, Feb. 19th at 7 p.m.