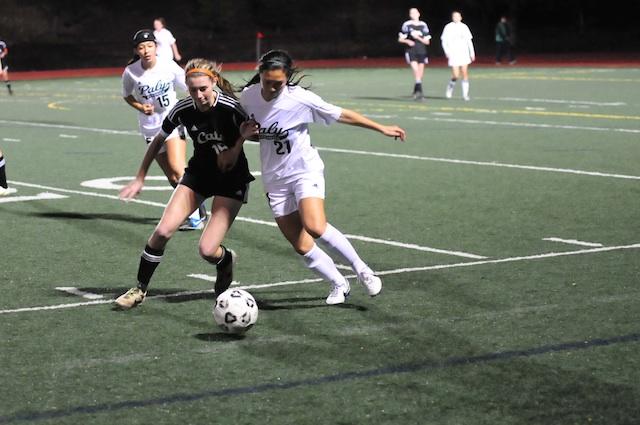 Alison Lu ('16) fights for possession of the ball. Lu is up against Los Gatos player in the mid field.

The Palo Alto girls’ soccer team lost 2-0 to the Los Gatos Wildcats on Wednesday, March 5th during the CCS semifinals.

The Vikings came back strong after halftime with an attempted shot on goal.  The Wildcats responded with a two fast breakaways, but Jacey Pederson (‘16) quickly stole the ball away each time. The Vikings momentum kept going with a closely missed shot off of a Wildcat throw-in. Following several missed passes from both teams and another attempted goal from the Vikings, the Wildcats found the back of the net for their second goal of the night with 13:09 left in the game. Pederson attempted another shot on goal, but the game ended with the Wildcats defeating the Vikings 2-0.

Captain Sunny Lyu (’14) thinks that despite the loss the team played well.

“The game went really well. Los Gatos is a good team and they’re pretty physical but we battled pretty well. We gave them a good fight,” Lyu said.

Pederson also expressed that the team put in a valiant effort during their final game of the season.

“I think the team put out a pretty good effort. We came out knowing it was going to be a pretty tough game but I think we gave it everything we could. We came out confident,” Pederson said. “I think it [the game] represented us fairly well, it represented the fight we have as a team”.

Assistant coach Eric Seedman thought the game went well despite the loss and was happy with the season as a whole .

“Well obviously it [the game] didn’t go our way but I thought the girls put out a tremendous effort and that they played a good game. We created at least as many if not more chances than the other side and they were very opportunistic,” Seedman said. “The season was tremendous, again it was a really good effort by everybody. I think the girls enjoy each other and we played some great soccer. We have a lot to build on for next year.”