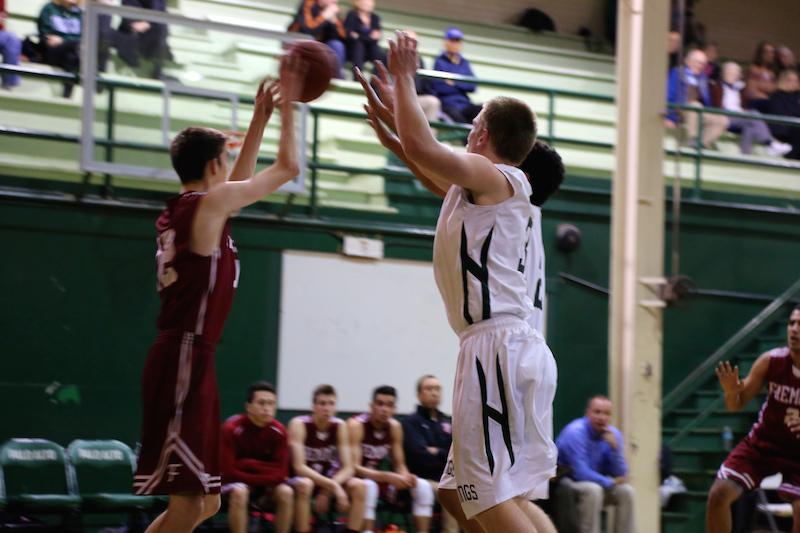 Oliver Svirsky ('16) jumps up to block an opponent's pass. The Vikings went on to dominate over the Eagles 58-44.

The Palo Alto boys’ basketball team kicked off its 2015 season at home against the Fremont Eagles Tuesday night in the big gym, advancing their overall record to 10-2 and league record to 1-0.

The Vikings started off strong with fast offense against the Eagles to carry the lead 13-9. Shooting guard Kevin Mullin (‘15) helped the Vikings finish the quarter with a strong drive inside the paint and a deep 3-pointer to advance their overall score to 15 points.

Following Paly’s quick offensive start, their zone defense helped keep the Eagles to a low score at the beginning of the second quarter. Post player Alex Dees (‘15) took a charge from the Eagles shooting guard to overturn the position and lead to the offensive of score by Oliver Svirsky (‘16). With other contributions to the Vikings offense, Johnny Rojahn (‘15) with a three pointer and Mikey Grandy (‘16) with a post move down the lane, the Vikings elevated their overall score to 24-16.

The first half ended with additional shots from the Vikings after scoring off of offensive plays and quick zone defense to keep the Eagles at bay with a score of 35-20.

The Eagles came out of the half ready to play. Paly’s offense missed shots from multiple players, but rebounds from both sides of the boards kept their lead 40-26. An assist from Mullin to Svirksy on a fast break play made the Vikings take a strong lead.

The end of the third quarter ended with buzzer beater ally-oop across court from Hall to Svirksy, making that his fifth score of the night. The Vikings held their lead 49-29 going into the final quarter.

Paly maintained its strong lead going into the fourth quarter, but with multiple fouls against them, the Eagles quickly caught up to the Vikings 53-40. The Vikings’ fast past offensive and fast break plays led Mullin find Svirsky in the paint to advance their lead to 58 points, with 33 seconds left to play.

The Eagles pushed the ball back but were unsuccessful before the clock ran out. The final score for the game was 58-44.

The Vikings were pleased with their overall performance against the Eagles, but felt they could find more room to win.

“It was one of our worst shooting nights of the season so we had to find other ways to score,” Dees said.

Paly had a team performance from both sides of the ball to help them solidify their win against the Eagles.

“No one player took over tonight, it was more of a team win,” Dees said.

The Vikings look forward to working hard this week in practice as they prepare for their games against the Wilcox.

“They run a zone the entire game …  so we have to prep for that in practice,” Dees said. “We will run a scout team so we will have to learn some new sets, some new plays to counteract it.”

The Vikings will play this Friday in an away game against the Wilcox Chargers at 7:45 p.m.