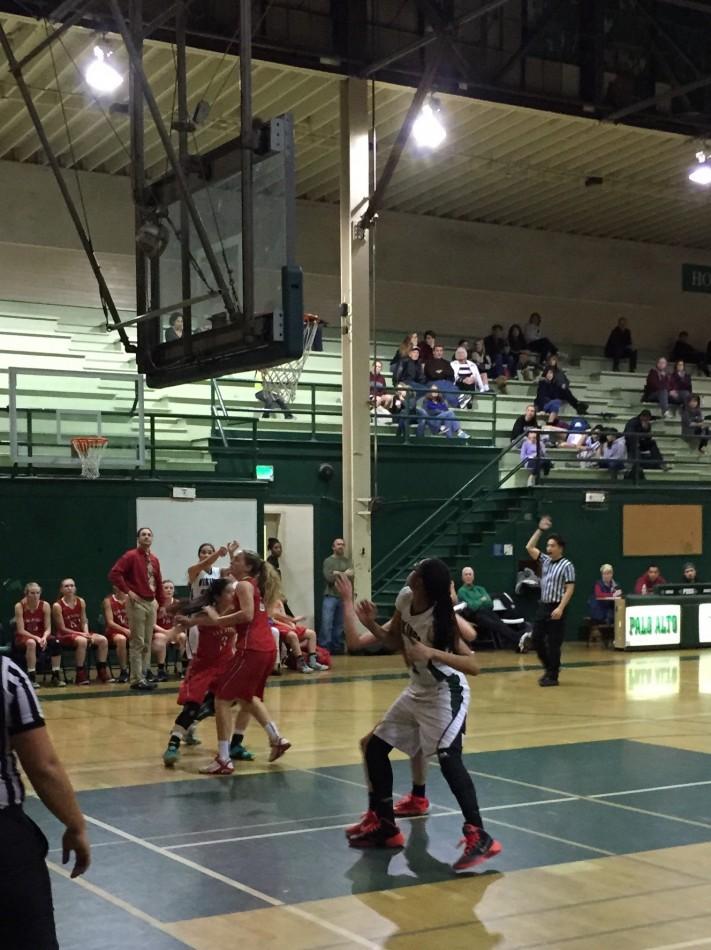 Alexis Harris ('17) boxes out a Saratoga defender in hopes of an offensive rebound. Harris had 11 points, three boards, and five blocks in the game.

Koyama was pleased with her game. “I’ve definitely gotten my shot back,” she said. “The past few games I haven’t been able to hit many threes, but I did that well today.”

After a great first quarter, the Vikings led 13-5, this in part from an outstanding and rather suffocating defense and great passing.

“Passing has been the biggest [for us]. Our girls are willing to pass to each other and trust each other to perform,” head coach Scott Peters said.

After trailing by as much as 10 points, the Falcons started cutting the margin in the second quarter, bringing the score to 28-22 Paly.

The third quarter brought a rejuvenated Viking squad back on to the court. After being dominated in the second quarter, the girls came out ready to change the momentum back in their favor. With key buckets from Harris, Koyama, and Lovely, Paly extended its lead to nine.

Peters believed staying strong in the game both on defense and offense helped keep the momentum on the Lady Vikes’ side.

“We withstood their run [in the second quarter],” Peters said. “They’re a tough team with a great coach, and they put pressure on our defense. Our girls were able to stay calm, play hard and weather the storm.”

Lovely, who also added two rebounds and six steals, thought that halftime adjustments were critical to stopping the Falcon attack.

“In the first half we were up and down, but in the second half we really picked it up and started playing together better. We still need to be more aggressive and hit more transition threes than we did today,” Lovely said.

Throughout the fourth quarter, the Vikings maintained a ten-point lead on the Falcons, easily closing out a 57-44 win.

“We knew what they were trying to do offensively, and we wanted to force them to hit tough shots, which we did,” Peters said.

Next up for the Paly is Los Altos. The Lady Vikes will play the Eagles on Friday at 7:45 p.m. at Los Altos, where Paly hopes to improve to a 4-0 league record.