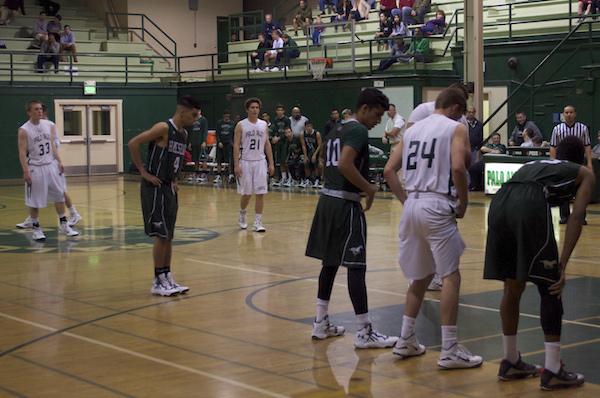 The boys’ basketball team kicked off Friday night with a big audience in the Paly gym as they faced the Homestead Mustangs. The Vikings fell to the Mustangs 58-43, making the game was the team’s first league loss. The Vikings were five for 28 from the three-point line and were disappointed in their performance.

“We didn’t play our best tonight, it was a little bit disappointing because we had a very big crowd in the gym tonight. We just weren’t making our shots tonight,” point guard Kevin Mullin (‘15) said.

The first quarter started off strong for the Vikings as they advanced against the Mustangs with an early lead. Alex Dees (‘15) was fouled in the paint and taken to the free throw line where he made both of his free throws making the score 4-2. Justin Hull (‘16), Mullin and Mikey Grandy (‘16) also helped the Vikings gain a tight lead 10-6. It wasn’t until long that the Mustangs came back with two strong three pointers advancing the Mustangs score to 12-9 over the Vikings. Johnny Rojhan (‘15) helped Paly stay in the game throughout the first quarter by making three from behind the line, and giving the Vikings back their lead 13-12.

The Vikings started the second quarter off with high intensity from their offense, Oliver Svirsky (‘16) hit a three and Mullin was fouled in the lane to help solidify their lead 18-12. Homesteads offense also proved to be ready to play as they came back and made two three pointers. The Vikings stay strong and made two threes to offset Homesteads latest score, 24-18. Homestead came firing back by making two shots in the paint and a three pointer to take over the lead 28-26. Grandy and Hull both caught back up to the Mustangs tying the score before half 28-28.

The Mustangs gained on their lead in the fourth quarter, as they hit the majority of the shots to improve their lead to 48-37 with 5:50 left in the second half. Rojahn missed two three pointers as the clock kept winding down. The Vikings proved defensively that they were still in the game by Mullin capitalizing on a steal from the Mustangs and passing the ball down court to Miles Tention (‘17) for a layup, 37-46. Svirsky put up another three outside of the paint from the help of offensive rebounds. With the Vikings still down Corey Bicknell (‘15) attempted to shoot for a three but was unsuccessful for the Vikings. The rest of the half winded down with the Mustangs in favor. The Mustangs made the rest of their points from the free throw line after multiple fouls on the Vikings. The final score was 58-43, giving Homestead the win.

After their first league loss, the Vikings are looking to improve on their weaknesses from this game.

“We’re going to just have to go up from here. We can still win leagues, it’s not over,” Mullin said.

Despite the loss Paly still remains hopeful as they remain number one in the league with a 4-1 record so far.

“Our goals are still to win the rest of our games and win leagues,” Grandy said.