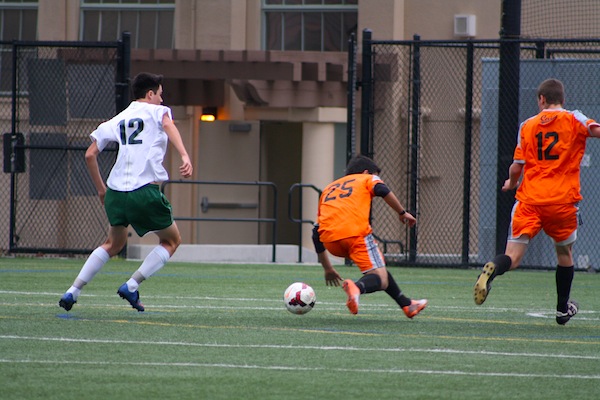 The game began with evenly-matched intensity from both sides. Ariya Momeny (‘16) and Xavier Sherer (‘15) both took shots on goal early on in the first half, but were unsuccessful in their attempts. Although the Vikings continued to put pressure on their opponents, the Cats managed to defend their side through passes made to their midfielders and numerous saves by the goalkeeper. However, Los Gatos was similarly unable to score; in a penalty taken near Paly’s goal, defender Steven Blatman (‘15) and center-mid Wesley Woo (‘15) cleared the ball from the box. After several failed breakaways by Woo and many changes of possession between the two teams, Paly was finally able to make the first goal of the game. With a long pass from the far right made into the center, Cole Tierney (‘16) arched the ball over the keeper’s reach, bringing the score up to 1-0 towards the end of the first half.

As the game pressed on, so did the Vikings as they fought off the forward-pressing Wildcats. With an even distribution of control over the ball, Paly continued to push down the field; Dami Bolarinwa (‘16) and Tierney both put continuous pressure on Los Gatos’ goal. With several breakaways by Los Gatos players, Paly goalkeeper Eli Friedlander (‘16) was able to make saves that allowed the team to continue to win into the second half. However, after a player managed to make it down the field and past Paly’s defense, Los Gatos made a low shot into the back of the net and brought the score to a 1-1 tie. The Vikings quickly adjusted to the change of score by increasing their intensity and putting added offensive pressure on the Wildcats, with close shots by Michel-Ange Siaba (’17), Sherer and others. With a foul made on Tierney near the goal, Paly had the opportunity to score another goal and get back the lead; however, the team was unsuccessful in its attempt on goal. After Blatman and Preston Kuppe (‘15) continued to clear the ball from Paly’s half, the team’s reign was brought back when Tierney was passed to in the center. Hitting the ball over the Los Gatos goalie once more, Tierney brought the score up to 2-1 with less than two minutes left on the clock. As the game drew to a close, the Vikings came out on top.

Finishing the game with a win was important for the team not only because it was the final game of the season, but also because it was senior night and because it means that the boys have finished first in the league for the year. Many of the players are very excited with the success of their final match in league for the winter.

“We really built that up more than we needed to, but it was a great finish,” Blatman said.

The next step for the team is going on to Central Coast Section (CCS). Kuppe notes that proceeding past the quarterfinals of CCS would be a new experience for all of the players on the team.

“The furthest that any of us on the team has been is the quarterfinals, so hopefully we can get further than that,” Kuppe said. “Our team needs to work on defense, we were really good for the first half of the season and we won all our games. We just need to work on communicating better.”

Blatman agrees, adding that the team has to work hard to succeed.

“We just have to take it one game at a time,” Blatman said.