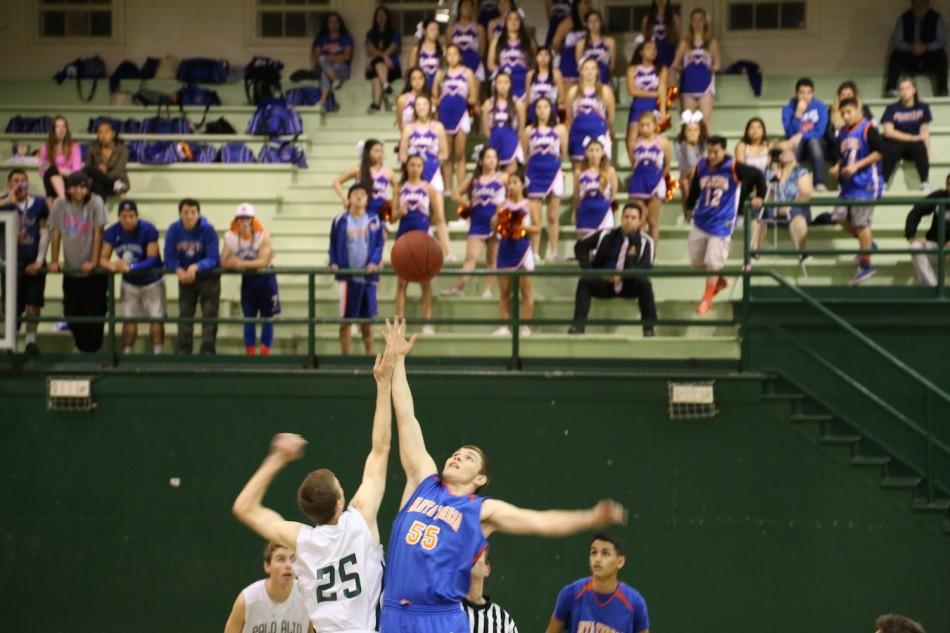 Justin Hull ('16) wins the tip for the Viking's in their last game of the season.

Santa Teresa dominated the game from the start, thanks in large part to exceptional deep-ball shooting. The Saints hit a total of 12 three-pointers in the game to the Viking’s five, a statistic that Paly’s players knew would be difficult to overcome.

“Their outside shooting was outstanding,” Kevin Mullin (‘15) said. “It was pretty insane. Usually we’re the team that is hitting threes, but tonight they were raining it on us.”

Mullin scored 33 points in the game, most of which came on drives to the basket instead of his usual deep threes. He and the other Paly sharpshooters had an off night, making only 20.8% of their shots from behind the arc.

“Live and die by the three, so today they had twelve threes and we had five, that’s kind of the difference of the game,” Miles Tention (‘17) said.

The Vikings quickly got out to a 6-0 advantage on layups by Alex Dees (‘15) and Oliver Svirsky (‘16) and a pair of free throws by Mullin. After that, though, Santa Teresa’s backcourt began to heat up, sinking four threes in the first eight minutes to close the first quarter up 17-7, Saints.

“They hit a few threes and that really got them going,” head coach Adam Sax said. “I think they got more confident, and we weren’t hitting our threes so and we got off to a slow start. We really didn’t hit our threes and we weren’t getting in the lane, so it just made it difficult.”

The second quarter was the same story for the discouraged Vikings, as Santa Teresa continued to play tough defense and hit shot after shot. Closing the quarter on a 14-3 run that saw them hit two more threes and a buzzer-beating tip in, the Saints held an 18 point lead at the end of the first half.

While the Vikings could have played tighter press defense, much of Santa Teresa’s scoring was, in Mullin’s opinion, undefendable.

“Maybe we could have closed out better on their three point shots but when they’re hitting them from like 25 feet there’s really not that much you can do defensively,” Mullin said.

The rest of the game was playing catch-up for the Vikings. Although they came out of the locker room looking strong, Palo Alto missed eight layups in the second half alone. After Paly’s 7-0 run that brought them within 12, Santa Teresa stepped on the gas pedal once more, extending their lead to 20 with just under four minutes to play.

In a futile attempt to save their season, Mullin and Jonny Rojan (‘15) frantically tried to close the gap. Playing an extreme full-court press defense, the Vikings were able to cut the deficit to 10. Alas, time was working against the comeback attempt, and Corey Bicknell’s (‘15) free throw with 50 seconds left would be the last point the team would score on the season.

“Next season [we will be] working on driving more; right now it’s more pick a shooter and next year will be more getting to the basket,” Tention said.

Coach Sax, and his athletes, know what they need to do in order to be more successful next season. The Palo Alto boy’s Junior Varsity (JV)  basketball team had an undefeated season in league and the varsity coaching staff is excited to see what these young men have in store for the Vikings.

“We’ve got five or so returners, we’ll bring some JV players up and it’ll be a nice mix next year,” Coach Sax said. “There’s a really strong lower class so they should be really strong next year.”