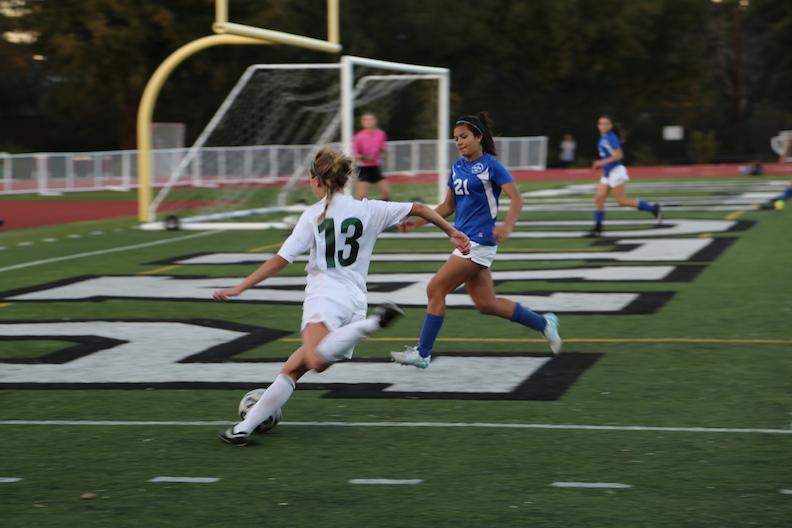 Palo Alto girls’ soccer trounced the Santa Teresa Saints, 5-0 in their CCS semi-final match. This win advances the Vikings into the championship game.

The Vikings started the game off strong, maintaining their possession well throughout the midfield and keeping Santa Teresa on their defensive half of the field.

Paly took the lead with a shot by Jacey Pederson (‘16) from the top of the box after she fought off three defenders and ripped it over the goalkeeper’s head, making the score 1-0 at 24:56 into the game.

The Vikings then increased their lead three minutes later with a chip over the midfields head by Pederson onto Nika Woodfill (‘16) who took her defender on and cut back giving herself strong shot past the keeper into the low right-hand corner of the goal.

“The girls played with a lot of desire tonight,” Coach Kurt Devlin said. “They came out with high energy and put the other team under pressure, they really went for it and got rewarded for their efforts.”

Paly continued to gain opportunities with the efforts of outside midfielder Talia Malchin (‘17) who sent in cross after cross, which forced the Saints defensive line to stay on their toes.

Late in the first half stoppage time Woodfill ran onto a ball sent down line by Malchin and crossed it into Natalie Maloney (‘17) who finished on a sliding volley, which made the score 3-0 going into the second half.

“In past games we have had strong first halves, but haven’t really been able to execute as well later in the game,” Malchin said. “So we really focused on that going into the second half.”

Two minutes into the second half Malchin dove into the box on a corner kick and scored using her stomach, the effort paid off and gave the Vikings a 4-0 lead.

“I think we came out really strong in the second half,” Pederson said. “We haven’t done that in the past and that, along with our midfielders winning balls through the center was the main reason for our victory tonight.”

The Saints began to gain momentum and give goalkeeper Dhara Yu (‘17) some action, but the strong Viking defensive line was able to hold them past their burst of energy.

At minute 24:50 the Saints had a handball in the box and Paly was awarded a penalty kick and scored high into the center netting. This then made the score 5-0, and gave Pederson her second goal of the night.

“Defensively we were fantastic tonight,” Devlin said. “They have one of the top players in the CCS and the girls closed her down.”

The Vikings continued to hold Santa Teresa and drove up the field with strong passing and speed. The most dangerous play of the half for the Vikings defense was when the Saints got a free kick from the top of the box, but the play was quickly shut down by keeper Sarah Lim (‘15).

The team fought hard and it showed, they finished the game with a 5-0 win, and a spot in the championship match of the CCS tournament. Stay tuned for time, location, and opponent of the game.