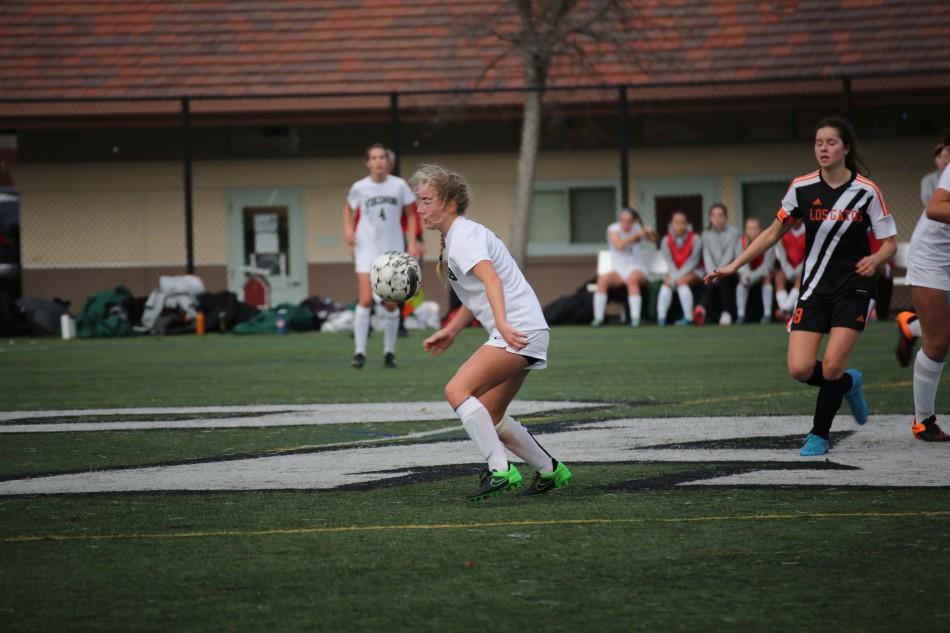 The Paly girls’ soccer team took down Los Gatos by the score of 3-0 on Wednesday afternoon.

The Vikings started out the game strong, having some chances early from both corner kicks and set pieces, but they couldn’t find the back of the net.

The first portion of the game was fairly even with the ball not leaving the midfield too often, but after about 20 minutes Paly began to dominate much of the possession and most of the game was played in Los Gatos’ half.

Their work paid off when Jacey Pederson (‘16) ran through the opposing defense and put the ball into the bottom corner of the net to give the Vikings a 1-0 lead.

“I think we started out kind of slow, but then we really ramped it up about halfway through the first half and I thought we finished really well,” Pederson said.

Soon after, Los Gatos had their best chance of the first half when they intercepted a pass back to the goalkeeper and were clear on goal. Paly goalkeeper Linnea Carlstrom (‘16) was quick off her line however and cleared the ball away.

The first half finished with Paly dominating the possession and they went into the break with their 1-0 lead.

Similar to the start of the game, the second half was fairly balanced and neither team had many chances on goal for the first 30 minutes.

In the last 10 minutes, the Vikings went on the front foot and scored two goals to secure the win with the goals coming from Emily Tomz (‘18) and Alison Lu (‘16) respectively.

“I think it was a good game. Because of scheduling we only had our first real practice with everybody just two days ago. We’re gonna be really good, we just need to focus on playing together,” coach Eric Seedman said.

The team will continue to push on in their next game at Homestead on Friday, January 8th.