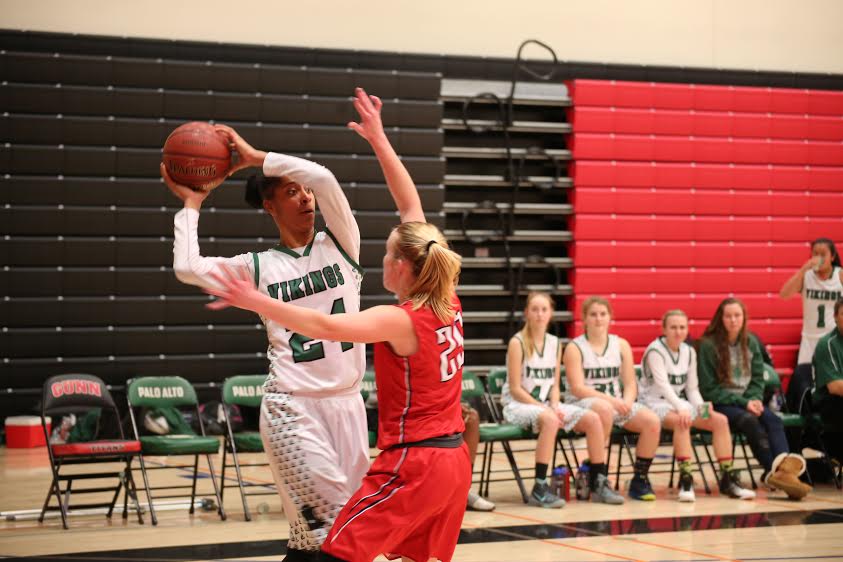 Coach Scott Peters was pleased with their exhibition of defensive skills.

“I thought our pace and energy on defense was very good. Defensively we really made them work.” Peters said.

Alexis Harris (‘16) agreed with Peters: “We really worked on our defense from last game when we only lost by three, and it definitely paid off.” Harris said.

The start of the game was tight, as the scoring went back and forth.

The game was tied at 4-4 in the middle of the first quarter before Saratoga pulled ahead to 8-4. With two 3-point shots made by Ellie Jeffrie (‘19) and Lauren Koyama (‘17), a quick comeback by the Lady Vikes ended the quarter with a lead of 10-8.

Harris scored 10 of the Viking’s 18 points in the second quarter.

To further strengthen their lead, Carly Leong (‘18) scored two 3-pointers, ultimately going into the second half with a 28-19 lead.

Palo Alto was able keep most of the possession throughout the third and pulled ahead even more, raising their 11 point lead to 17 by the end of the quarter.

The last quarter began with the Falcons scoring two consecutive shots to make the score 43-31.

With five minutes left after a Palo Alto timeout, Courtney Lovely (‘16) scores the first Viking point in the fourth.

The final buzzer sounded to grant the Vikings a victory with the score of 48-37.

Both Peters and Harris mentioned the team’s need to work on making free throws.

“Free throws are one of the main things [to focus on], so we really have to work on putting them away.” Harris said.

“We are getting a lot of opportunities and leaving points on the floor when we aren’t hitting [free throws].” Peters added.

The girls team will play away against Los Altos next on Friday, February 5th, at 6:15pm.