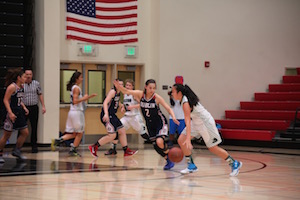 Palo Alto Girls’ Basketball fell to Dublin High School at Gunn this Wednesday, March 9th in the first round of the NorCal Tournament, ending their season.

Senior Courtney Lovely (‘16) comments on the end of her basketball career at Paly and evaluates the season as a whole.

“I think [our season] was awesome. We ended up winning CCS so that’s great and we didn’t go that far last year so it was awesome to be able to do that.” Lovely said.

The game started off with Alexis Harris (‘16) winning the tip off, with subsequent back and forth possession between the two teams.

Less than a minute into the game, Paly gets onto the scoreboard with two points from Harris, but Dublin retaliates with another two pointer.

Skylar Burris (‘17) makes a three-point shot followed by Lauren Koyama (‘17) making another one.

The first quarter ends with Paly’s two point lead of 14-12.

The second quarter begins with two points from Carly Leong (‘18), followed by another three made by Koyama, right before she gets fouled and makes both of her free throws.

Dublin starts to come back with four consecutive points after Paly’s largest lead yet, being up 21-12 with just over five minutes to go.

Harris, Koyama, and Lovely get fouled, each contributing to Paly’s lead of 28-16 at 35 seconds left.

Dublin comes into the second half making two three-pointers in less than one minute, then Harris lays it up and scores.

Paly calls for a timeout as Dublin pulls ahead to 37-35.

Harris and Leong get fouled, but Dublin makes another three to keep their lead with just over a minute left in the third, and end the quarter with five more points to make the score 45-39 in their favor.

Harris scores a two pointer right off the bat entering the final quarter of the game.

After a Dublin timeout, they make two points and earn two fouls, only to miss the four potential points.

Shortly after another Paly timeout, the Vikings held the ball beyond the shot clock and lost possession.

With less than three minutes to go, Dublin gets fouled and makes both free throws to get a five point lead.

At 1:15 to go, Lathi scores a three, with Koyama following a Dublin two pointer with yet another three pointer within a minute of Lathi.

Dublin holds onto their lead of 53-47 with 30 seconds left in the game, and both teams score two pointers.

The final buzzer sounded with the score of 55-49 in Dublin’s favor advancing them in the tournament but halting the Vikings’.

Lovely accredits Dublin’s win to their hard work throughout the game.

“I think we played pretty hard but overall I think Dublin just wanted it more and that’s why they came out with the win.” Lovely said.

The Girls Basketball team ended their season tonight, with the titles of CCS Open Division Champions, and qualifiers for the NorCal tournament.