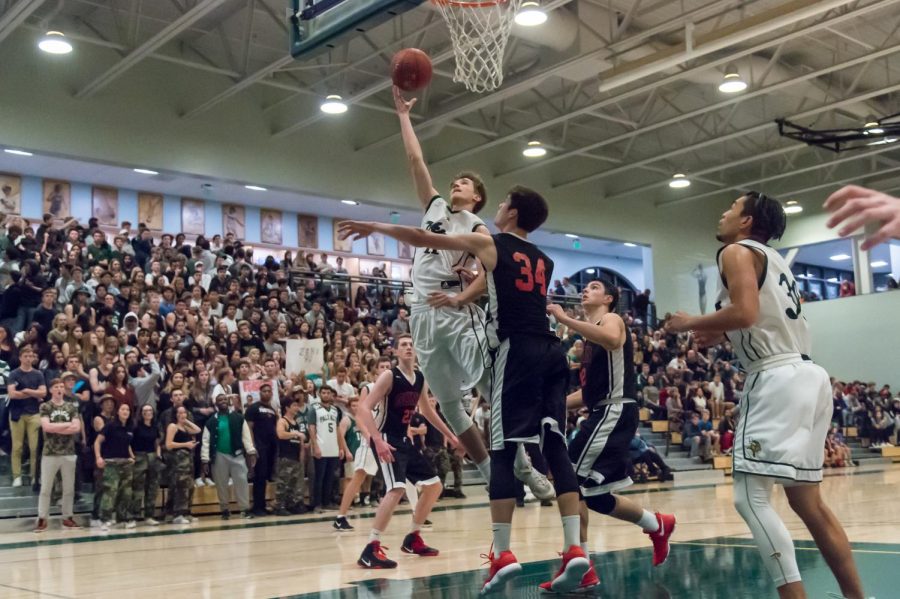 In front of a rowdy crowd of both Paly and Gunn students, boys’ basketball defeated the Titans 56-40 in their only matchup of the year.

Both teams struggled to get going offensively early as Paly lead 10-8 at the end of the first quarter. Despite their early shooting struggles, the Vikings’ were able to control the game with their defense.

“We stuck to what we’ve been doing that has been successful for us this year,” Max Dorward (‘18) said. “We played aggressive on ball defense to disrupt their offense and executed our plays to score efficiently.”

In the second quarter, Paly’s offense got going a bit while they were able to continue to frustrate the Titan’s offense. They lead 25-15 at half.

Paly finally made their move to break the game open in the third quarter by continuing their harsh defense and stringing together baskets. Bryant Jefferson (‘18) scored seven points in the quarter, dominating Gunn on the post because they couldn’t leave Paly’s three-point shooters. Meanwhile, the Paly student section was passionate and helped change the momentum of the game.

“Having a big crowd like that helps drive momentum and helps us go on big runs,” Spencer Rojahn (‘18) said.

“The fans gave a great atmosphere yet again for the game and we were able to ride behind them,” Dorward said.

Paly’s bench played well in the fourth, holding the lead and closing out the game. The Vikings went on to win 56-40. Paly will look to continue their winning ways next week home on Wednesday vs. Homestead and at Los Gatos on Friday.