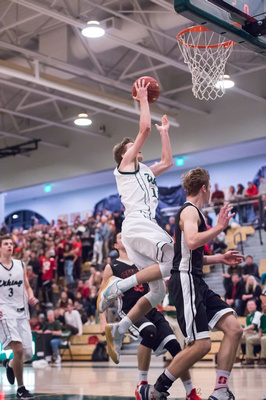 Max Dorward goes up with a shot.

The Vikings took control from the tip, wasting no time building their lead and setting the tone for the game. By the end of the quarter Paly led by 15, up 21 to 6. Great ball movement throughout the game allowed the Vikings to find and make open shots early on.

At the half Paly had held Mountain View to a mere 11 points and lead by 33.The second half of the game the Vikings were able to get to the free throw line, and convert the majority of the time. Defense was key all game, and Paly never stopped to let up. Multiple forced turnovers led to easy transition buckets by the Vikes.

“We went back to being really aggressive in the half court and forcing their ball handlers to work hard to get anything, I thought Shmutz and PG3 did a great job making sure their guards couldn’t set up the offense” said Will Schlemmer (‘18).

The Vikings win against Mountain View keeps them undefeated with a 6-0 record in league. They’re now looking forward to Saturday when they will face of against Menlo Atherton at the Peery Center at 7:30 in a non league game.

“We have two practices to prepare for M.A. and we’re going to make the most of them” said Max Dorward (‘18), “Deip will prepare a game plan and we’ll work on it in practice and execute on Saturday”.