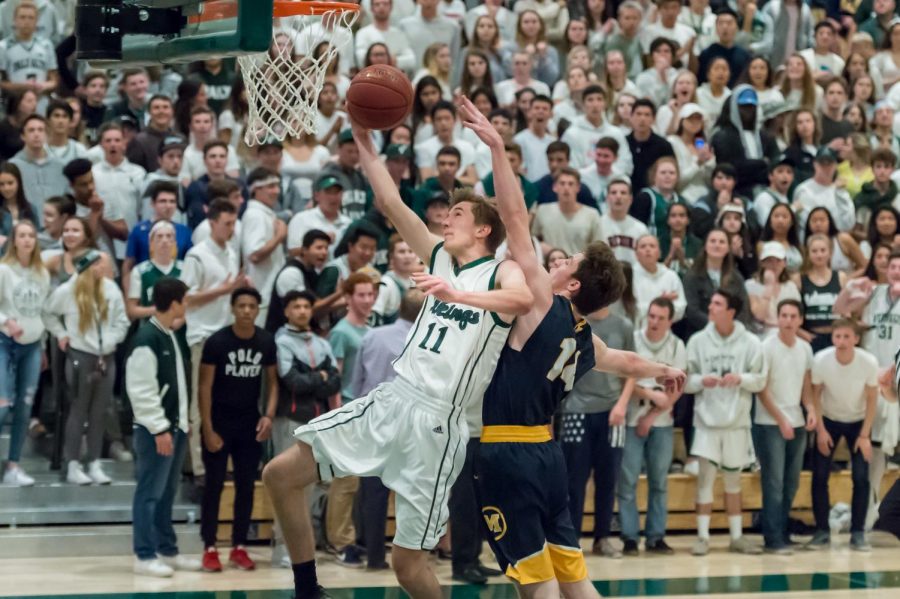 The game gave Palo Alto an opportunity for a rematch with the Knights who beat them back in December of 2017. Max Dorward (‘18) lead the way with 22 points and Bryant Jefferson was also in double-figure scoring, adding 12 points in the winning effort.

The Vikings were in control from the tipoff and their play on the defensive side proved to be crucial throughout the entire game. In the first and third quarters, Menlo scored a combined 15 points, and Paly held Lehigh bound senior Joe Foley to only four points who, according to MaxPreps, averaged 16.3 points per game this year.

“Our defense was extremely key because we went five to six minutes at a time with zero points yet we kept our lead,” Spencer Rojahn (‘18) said. “We knew that Joe [Foley] and Riley [Woodson] would be their top offensive threats and therefore we focused our help on them.”

During the game Paly’s student section, which was filled from top to bottom, was electric and brought energy for the players to feed off.

“The crowd was insane,” Dorward said. “They really brought it with a lot of energy that we were able to ride. It always helps when we have crazy support like that.”

Their victory over Menlo has given this year’s team an opportunity to compete in the D1 Norcal Championship for a second straight year and a chance at redemption.

“It means a lot to be in this position,” Dorward said. “Last year we came up short and getting another shot at redemption is huge and we plan to not waste the opportunity.”

Palo Alto will play Las Lomas High School on Saturday at Santa Clara University for a chance to go to the CIF D1 State Championship game.

“Las Lomas is a good team but definitely beatable,” Rojahn said. “We will watch film on them to figure out their play style and hopefully shut them down on Saturday.”