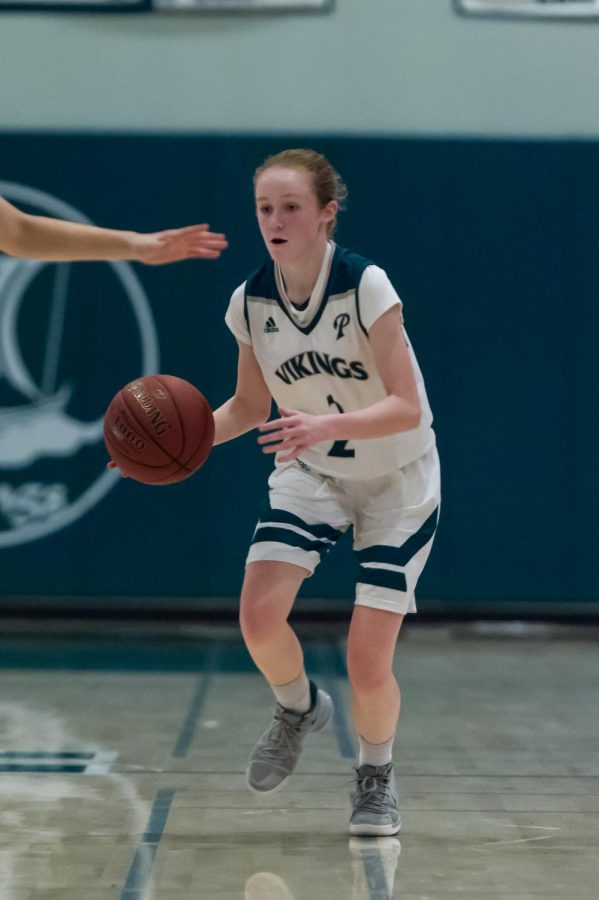 In tonight’s match-up against Cupertino, Paly had to come in ready for anything. The Vikes have their eyes set on maintaining their league domination and with the Pioneers ranked third in league, this win was crucial.

Carly Martin (’21) helped to secure the Viking’s win by going 14 for 22. Martin was thrilled for the challenge going into the game.

“It was definitely an exciting and nerve-racking game,” said Martin. “Cupertino has the best defense in the league, so we had to come out with a strong offense along with a strong mentality in order to get the job done.”

“We expected that it would be a really tough game, which it was,” said Peters.

The match was tough, indeed. Within the first quarter, both teams were neck and neck at 6-5 with Cupertino in the lead. The Vikes went on an incredible run, pushing all the way up to a 16-9 lead. In the final second of the quarter, Annika Shah (’21) banked a 3 to pull the Vikings into a lead of 19-9.

“I thought this was some of the best basketball our team has played, especially in the first quarter… for multiple players.” said Peters.

Suddenly the Vikes were enlivened by their ability to conquer the best defensive team in their league. They took advantage of the Pioneers straight man defense and managed to pull up their lead to an impressive 28-11 half-way through the second quarter. Shortly afterwards, Cupertino stepped up their offensive game and was able to drop the deficit slightly by bringing the score up to 30-17.

After the half, Cupertino seemed to change up their defensive strategy. With Shah as an offensive powerhouse, they shifted their defense to doubling up on her.

“We were expecting them to double Shah more to start, they didn’t do that until the second half.” said Peters.

Within the first minute of the third, the Pioneers banked a three challenging the Viking’s lead. Each team inched up their score with free throws and field goals. At the end of the quarter, the Vikings were able to maintain their lead by a score of 41-30.

In the final quarter, the Vikings teamwork really set them high above Cupertino. Whether it was Martin making crucial passes or Shah sinking impressive shots, the Vikes seemed to have this game all figured out. Half-way through the fourth, Paly brought their lead up to 51-34. The final half of the fourth was low scoring as neither teams could quite overpower the other’s defense, leaving the final score at 55-36.

While Peters was proud of the team’s winning record and hard work, he emphasized to the girls that they have to keep up the energy that they have going.

“Cupertino is a tough team and we’ve done well so far but it doesn’t matter if we don’t keep up this momentum… this was a big win for us.”

The Paly Vikings are now 9-0 in league and 17-3 overall as they are keeping their eyes on a league championship and even a CCS championship in the future.