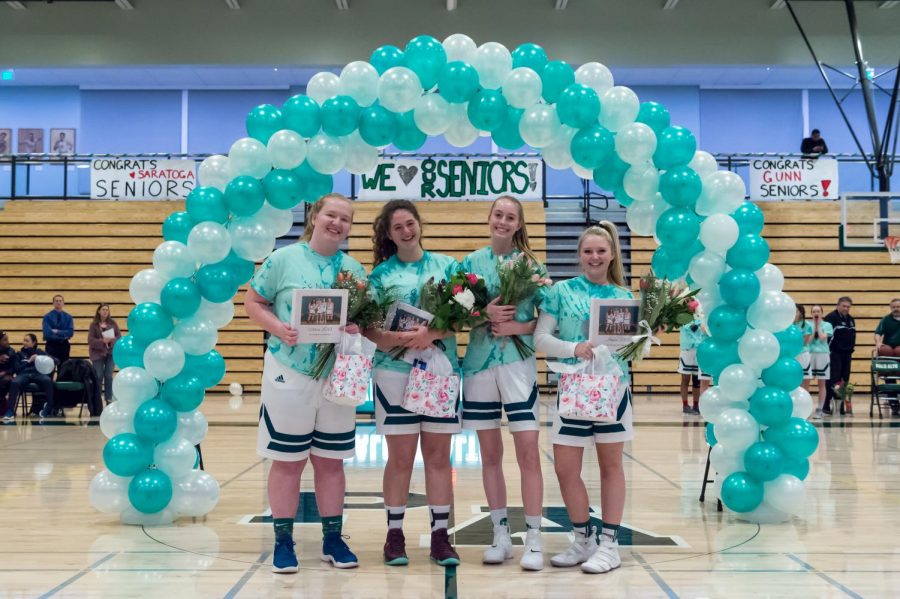 Coming into the game, Paly had two main goals: winning to complete an undefeated season and supporting the seniors.

“We definitely wanted to support our seniors and make sure that they had the most playing time they could have,” Carly Martin (‘21) said, “and we really wanted to win and get 12-0 in league, so it’s nice to finally accomplish it at the end.”

Not only did Paly celebrate their win Monday night, but they also commemorated their 4 graduating seniors, Annie Niethammer, Ellie Jeffries, Esme Stotland, and Lauren Daniel.

The game began neck and neck, with Paly’s first lead coming from Ellie Jeffries’ (‘19) 3 pointer 3 minutes into the first quarter. However, they continued to fight a hard battle against Saratoga and ended the first quarter with a tie of 11-11.

With solid communication and ball movement from Niethammer and Jeffries, rebounds from Stotland, and two 3-pointers from Daniel in the second quarter to tie the game and ultimately pull the Vikings ahead 17-14, Paly managed to end the half up 27-19.

In the second half, Carly Martin (‘21) and Annika Shah (‘21), helped the Vikings maintain their lead through strong defense and a series of fastbreaks. Overall, the Vikings’ team chemistry shined through, resulting in a win margin of over 10 points.

“We really just wanted to win and execute the plan that we made before hand,” Stotland (‘19) said. “Working hard with people is the best way to get close with them and I’ve made lifelong connections with these girls.”

With the season over, the Paly Girls Basketball team looks ahead to CCS.

“Our next goal is to win CCS and then after that it’s to try to win Norcal,” Coach Scott Peters said. “Those are all hard things. The teams we’re going to play are going to be all difficult so we just have to work hard at practice and get a little bit better.”