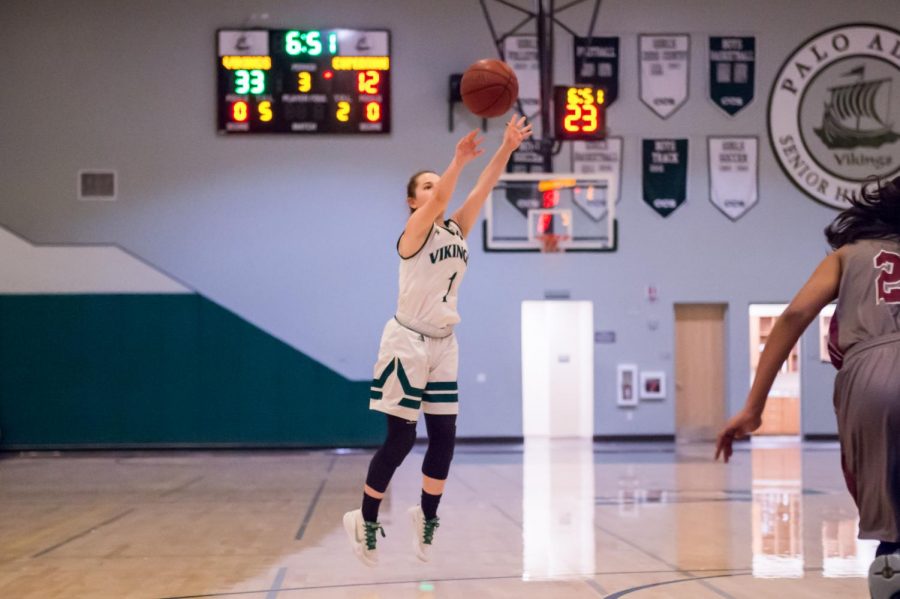 Kaella Peters scoring her second three in the second quarter.

The girl’s varsity basketball teams defeats Wilcox 55-30 on Friday. The team had a game full of great defense and great cheering from their energetic bench.

The Vikings had a bit of a slow start but were still able to maintain a lead and were up 13-7 after the first quarter.

In the second quarter, the team rallied together and came out with a lot of ambition to extend their lead. Early in the quarter Emily Neumann (‘22) hits a three to put them up, then Ilayda Turgut (‘21) has a massive block on defense which puts the team back on offense where Neumann scores a consecutive 3.

The Vikings had some great offensive possessions to get a few layups, and then after the time out, Kayla Peters (‘23) scores a three. Peters ends the quarter with another three-pointer putting the Vikings up 29-10.

The vikes scored a total of 16 points this quarter, making it the highest-scoring quarter.

Throughout this quarter not only did the team have great offensive possessions, but they also were able to play great team defense. The girls worked together and only let Wilcox score one point because of a free throw in the second quarter.

In the third quarter, the girls kept up their outstanding defense letting Wilcox only score 3 points. The vikes continued to extend their lead the rest of the game and had about a comfortable 20 point lead throughout the game.

The Vikings have their last home game next Friday, February 14th against Los Altos.