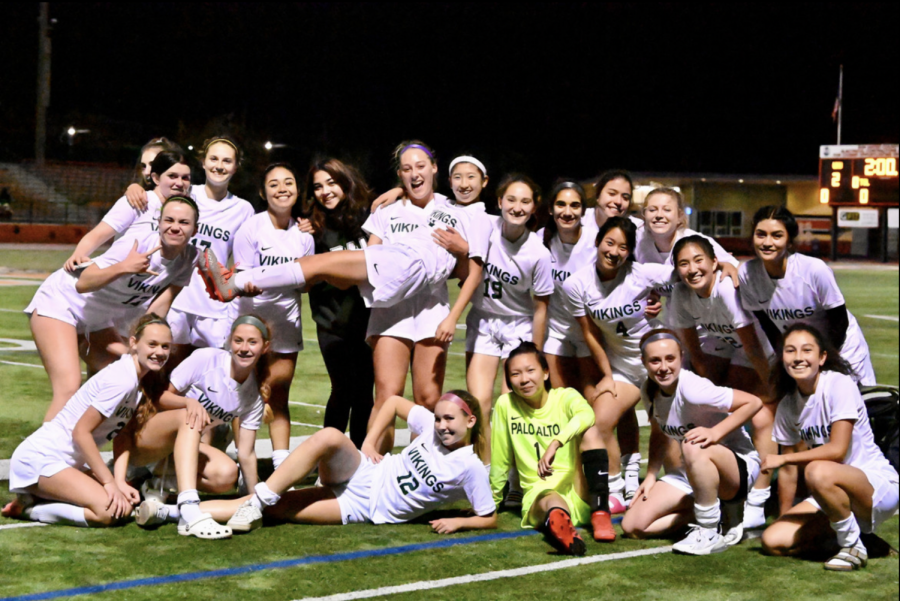 After a 6th place SCVAL finish last season, Paly Girls Soccer is looking to bounce back this winter. They have now played 2 pre-season games, losing 0-2 to Woodside and winning 2-0 against Hillsdale.

“Even after just our second game as a team we were able to fix a lot of things we struggled with in the first game so I’m excited to see how good we can get if we continue to adapt this quickly,” said senior Marianna Kessigner.

The team is coming back from a COVID year where many players chose to play with their club teams rather than the Paly team and is learning to play together once again.

“With all the seniors back who did not play last year due to covid, I would say our roster is pretty stacked with some strong players. We also have a lot of numbers this year, unlike the limited subs we had last year,” said junior Payton Anderson.

Almost everyone is looking forward to getting to know each other better and participating in team social activities, something that they were not able to do last year due to COVID restrictions.

“Last year, due to covid, our season was a bit odd and a lot of people did not play so we only had one team. This year we are planning on doing more social events, like team dinners and pasta feeds, which we could not do last year,” said Junior Addie McCarter.

New this year, the team is playing in a local tournament during the preseason, allowing for more practice before league games and more opportunities to get used to playing together. Many girls on the roster have not played together in around two years, and it will take some time for them to learn how to play together again.

“This plus our league games means we get to play nearly twice as many games as last year. This and the extra practice time we have will definitely make this season so much more memorable than last,” said Anderson.

The entire team is looking forward to this season, with a large roster of strong players and everyone playing. “We have really talented and skilled players, so once we adapt to each other’s playing styles and get a good sense of how to work together we will be a very strong team. We create a lot of opportunities and making sure we finish every chance on goal will be really important against the tougher teams,” said Senior Brighid Baker.

Junior Rachel North, along with other members of the team are looking forward to big rivalry games, such as playing Gunn. “I’m glad we have the opportunity to play against Gunn multiple times this season,” said North. They are our biggest rivals and have a very strong team this year, it’ll be a fun game”.

Everyone is excited to see how this season plays out for Paly Girls’ Soccer with a new combination of strong players, game format, and social events.