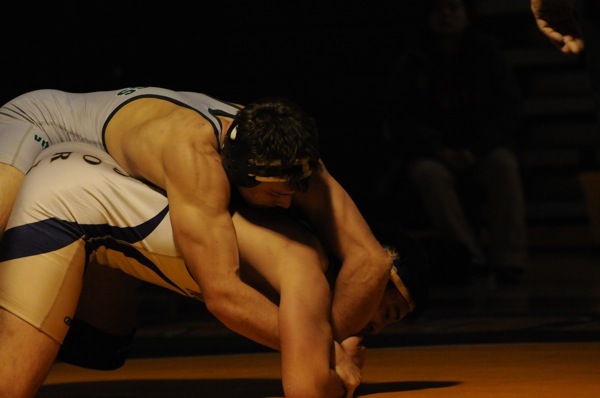 Kalen Gans ('12) goes for a pin against a Monta Vista wrestler.

Heading into the dual, the Vikings expected a positive outcome. However, in the end the score was closer than expected.

“We did enough to win the match,” coach David Duran said. “Some of the matches’ outcomes were different than what we expected.”

With one forfeit and two pins, the Vikings found themselves 18 points down within the first three matches.

Paly added some points to the scoreboard when co-captain Joey Christopherson (’12) and Trent Marshal (’13) both pinned their opponents. This brought the score to 18-12.

Then co-captain Nicholas Ortiz (’12) won based on points which added three points for the Vikings.

The Matadors came back when Gary Hohbach (’13) was pinned with 13 seconds left in the second period. With the pin, the Vikings went down 24-15.

Like Ortiz, Gunner Felt (’14) won based on points to bring the Vikings within a pin of a victory.

Jared Sweezy (’12) stepped up to the challenge and tied up the score.

Christian Lonsky (’12) suffered a close defeat, losing based on points. As a result the Vikings were down 27-24 going into the 171-pound weight class.

Kalen Gans (’12) tied the score with a victory in a close match.

In the 189-pound weight class, Erik Anderson (’13) was pinned. However, in the final two weight classes the Matadors did not have wrestlers. This awarded the Vikings 12 points, resulting in a Viking victory of 39-33. Although the end result was a victory, the team was expecting to perform better.

“I was expecting us to do better than what we did,” Christopherson said. “We won on forfeits which we were not trying to do.”

On Thursday the Paly team will face Cupertino in perhaps the most important dual of the season.

“That is a big match,” Duran said. “Whoever wins that dual will be the front runner to win the league.”

Members of the team feel that a win against Cupertino is within their grasp if they wrestle well.

“I feel confident that we can win if we step up a little bit from here,” Gans said.

The Matadors coach, Nolan Berga, also believes that Paly will do well against Cupertino.

“I think they are better than [Cupertino],” Berga said.

The Paly junior varsity wrestling team also won its meet against the Matadors, 15-13. Of the six matches, the Vikings won four. Jordan Gans (’14), Matt Slipper (’12) and Jake Dagan (’14) all won in points, and Henry Tucher (’13) won with a first period pin.