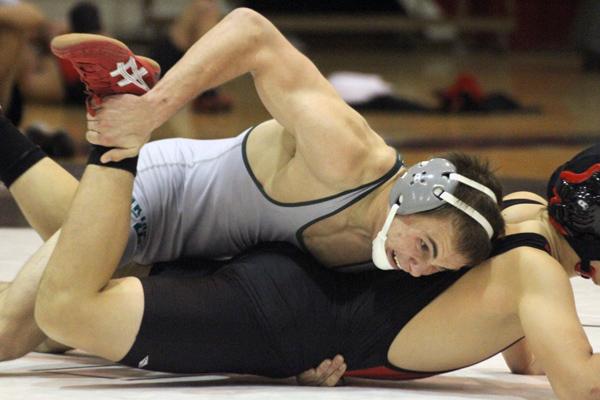 Gary Hohbach ('13) gains points for the Vikings by taking down his opponent. The team hopes to improve in the Mid Cal tournament this weekend.

Jump to Comments
Share on Facebook
Share on Twitter
Share via Email
Print
The Palo Alto High School wrestling team suffered a tough defeat (64-18) against cross-town rival Gunn High School. Both teams entered the Titans Gym last night with a 2-0 record in the De Anza Division of SCVAL, the Vikings having worked hard in anticipation of the dual.
The Titans put up 12 points early on in the meet, however, Jordan Gans (‘14) pinned his competitor Takeru Nishi (‘16) in the third period of a grueling match, gaining six points for the Vikings, bringing the score to 12-6.

Andrew Frick (‘14) also contributed a pin for the Vikings. Frick reflected on the teams’ performance.

“We prepared really hard for this match,” he said. “I think everyone on the team put in a lot of hard work but we just haven’t had enough guys. There are too many holes in the lineup and we couldn’t get the win, which is really disappointing because this is an important match up.”

The Vikings head to Gilroy today where they will compete in the Mid Cal tournament and Frick believes that a loss in last night’s dual has potential to help the Vikings bounce back.

“Even though we did lose, I think this will work as good incentive to get better and work harder for next week and the next tournament,” Frick said.