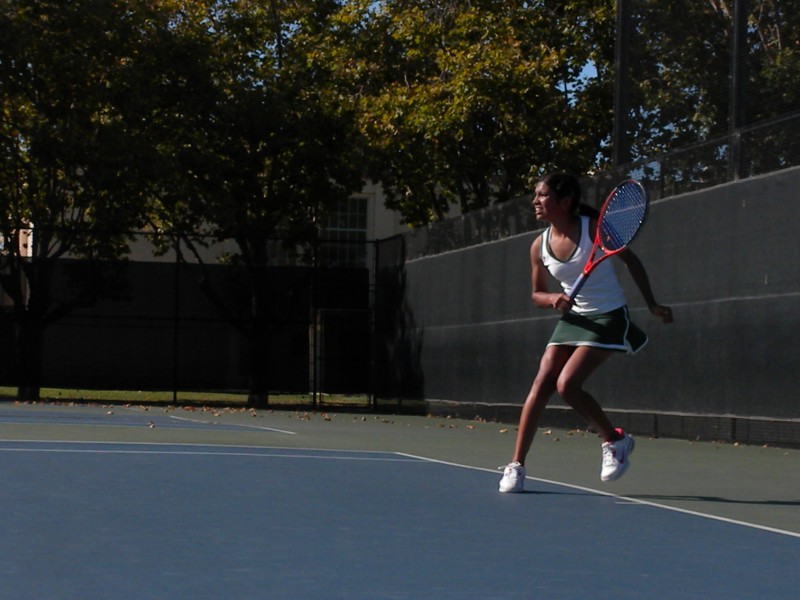 Budhiraja runs for a return in the first set. As the No. 1 single, she plays in every meet. Photo by Hilda Huang

Unlike some of Paly’s other fall athletic teams, varsity girls’ tennis has the luxury of a very close-knit team and experienced coach. Head coach Andy Harader has returned for another year with the team, which is essentially still comprised of the same players from last year.

The one open spot on varsity went to Kelsey Wang (’16), the lone freshman who happens to be team captain Felicia Wang’s (’14) younger sister. This year, one of the team’s greatest strengths will be its community.

“I think that our team is still very connected since only one player graduated last year, so there isn’t much of a change in the positions as far as what we play [in terms of] singles or doubles,” Tiffany Nguyen (’13), one of this year’s four captains, said.

Players have still been moving around spots, even though the team is made up of the same players as last year, minus Amy Ke (’12). To determine who will play which position for which meet, as well as to observe how his players have improved and give them good practice, Harader is having his players play challenge matches during practice.

The hierarchy of the player ladder has also dissolved, as Harader has been experimenting with shuffling his #3 and #4 singles and doubles spots in order to see who plays well with whom, and to see which players could provide the greatest support by winning their matches against tough opponents. Captains Sammy Solomon (’13), F. Wang and Aashli Budhiraja (’14), who played #3, #2 and #1 singles last year respectively, will remain important assets but Harader’s strategizing will lead to a more flexible team that can possibly beat the toughest competitors in the league, Monta Vista and Saratoga. This year, many of Monta Vista and Saratoga’s top players have graduated, leaving room for Paly tennis to surge.

Recent wins over Woodside (7-0) and Aragon (4-3) are telling of this new, stronger team.

“Last year we lost to Aragon, but it was a super close match,” F. Wang said. “Last week, when we played against them, we won 4-3, so it definitely shows that our team has improved. Our team stayed pretty much the same, but I think a few of the players played during the summer, so they’ve gotten better.”

Nguyen agreed, and said that it “boosted our confidence as a team, [especially] when we won against Aragon.”

The team will look to avenge last year’s losses against Aragon at the first league tournament, the Palo Alto Invitational, on Friday and Saturday at Paly. Coach Harader will be on the sidelines supporting his players, and only he knows what the draw will be this weekend. Until then, the captains and the rest of the team are practicing hard  for what they hope will be a successful season.