Female Underclassman of the Year: Sophie Frick – The Viking Magazine 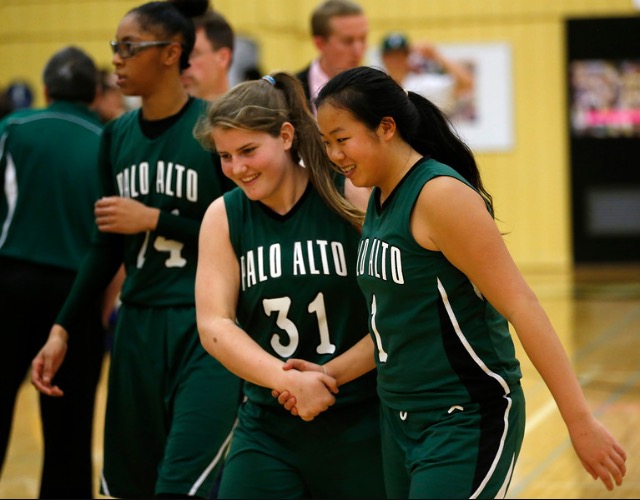 Sophie Frick (’18) and Carly Leong (’18) celebrate after sealing the girls basketball league championship. Frick has been chosen as Paly’s female underclassman of the year.

Sophie Frick (‘18) stepped foot on the Palo Alto High School campus with a pre-determined expectation to be a talented athlete. With two older siblings, Andrew Frick (‘14) who played football, lacrosse and wrestling then went on to play football in college, and Madeline Frick (‘17) who played softball and volleyball her freshman year and now rows, Paly was destined to receive a promising freshman for their athletic teams. Herself, S. Frick has participated in three sports at Paly: water polo, basketball and softball. She practiced at the varsity level for water polo until she was officially moved up for playoffs, and played on the varsity basketball and softball teams.

“I chose to play three sports this year at Paly because I love the sports themselves and the people,” S. Frick said. “I have heard many positive stories about Paly athletics form my siblings and I knew I needed to be a part of that. Its an awesome way to meet lots of new people and to be doing what you love.”

For the 2014-2015 school year, The Viking has chosen S. Frick as the Female Underclassman of the Year for exceptional skill and dedication in water polo, softball and basketball. Despite many promising athletes, S. Frick’s athleticism and sheer talent placed her ahead of the rest. Beside her award from The Viking, she has also received two MaxPreps player of the game awards for her varsity softball games against Sacred Heart Cathedral and Mountain View High School.

“I couldn’t pick a favorite sport because they are all so different,” S. Frick said. “I’ll have to go with whichever season it is, the sport I’m playing then is my favorite.”

S. Frick has made an impressive impact on the varsity softball team, especially for being just a freshman. In her game against Sacred Heart Cathedral, S. Frick had the winning hit with two outs and runners on both second and third base. Against Mountain View where she received her second player of the game award, S. Frick had 2 runs batted in (RBI) and played a beautiful game at first base.

“Her confidence all comes out [when she’s hitting] and watching her as a hitter progress from where she was till now has been greatly, greatly improved,” Laskey said.

Aside from softball, S. Frick is an exceptional basketball player. Her strength and skill proved beneficial for the team which had quite a season this year.

“Sophie is like a brick wall,” Courtney Lovely (‘16) said. “ I love having Soph on the team and it definitely would not have been the same without her this year.”

In her basketball season, S. Frick averaged 1.7 rebounds per game and a 60% free-throw average for being a non-starter. Her brother notes on S. Frick’s athletic ability.

“I think the biggest thing that has made her the athlete she is is the fact that she has always played up with better competition and it forces her to play like someone two or three years older than she is,” A. Frick said. “She always played on Madeleine’s teams with older kids, and that has helped her transition into playing varsity as a freshman really well.”

Aside from basketball and softball, S. Frick excelled in water polo as well. She practiced at the varsity level throughout the whole season until she was moved up for playoffs. As a freshman, this was a very big accomplishment, and her role on the team did not go unnoticed.

“She always was working hard and making sure everyone else on the team would be too,” teammate Haley Chalmers (‘17) said. “I can tell just from playing water polo with her that she is a naturally born athlete.”

Paly has been blessed with athletic ability throughout the many strong years of the sports program. S. Frick  has been able to continue on the Viking legacy of excellency.

“My goals for next years seasons are to keep practicing in my free time so I can keep in shape for next year,” S. Frick said. “Another big thing is focusing on being a team player, because when you work well with your team nothing bad can happen.” <<<