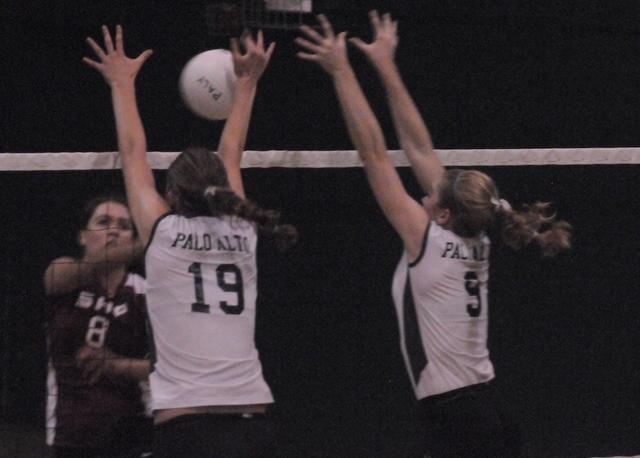 Melanie Wade ('12) and Kimmy Whitson ('12) go up for the block against Sacred Heart Prep. The Lady Vikes lost the first two sets and came back to win the next three. Photo Credit: Paige Borsos

The score in the fifth and final game was 15-11. The Vikings dropped the first two games to the Gators, 20-25 and 16-25, before storming back with three straight wins. Paly started off the the match slow, with missed serves contributing to their first two losses. The Vikings’ kills could not find the floor and gained their first lead late in the game at 12-11 with a Maddie Kuppe (‘12) kill, but SHP was in total control of the game and quickly finished Paly off.
Starting off the second game, Paly again started off in a hole, down 0-3. Setter Kimmy Whitson (‘12) provided the lone bright spots in the game, with two straight aces bringing Paly to 12-17 defecit. Sacred Heart, however, regained their composure and pulled away to a 16-25 win. The idea of an undefeated season hung as one large question mark in the air. But the team looked anything but confident.
“We just needed to start over again and get a fresh start,” Whitson said. “We really just needed to pull it together and come out with more energy.”
Coach Dave Winn attributed the team’s losses to tightness and mechanics.

“We played very tight in the first two sets,” Winn said. “We just needed to concentrate on playing more relaxing and having fun.”

Although Paly came out of the break invigorated, the Gators did not go down easily. The game went back and forth, with no team gaining more than a one-point lead until Sacred Heart middle blocker Payton Smith (‘13)  hit the ball into her own head for an error.

Paly ran away after that, winning eight out of the next ten points. Defensive specialist Shelby Knowles (‘13) led the way with an ace, and opposite Caroline Martin (‘12) contributed with two straight kills as Paly upped their lead to 17-10. Kuppe finished off the set with a kill to finish it off, 25-16.

The fourth game started like the first two; Paly dropped the first two points to again start the game off below water. Unforced errors by Sacred Heart allowed Paly to get back in the game, after Sacred Heart setter Jojo Kurtzman (‘13) hit the antennae and outside hitter and captain Sarah Daschbach (‘12) missed a serve long.

At that point, the game again went back and forth, exemplifying the similar play between the two teams. SHP seemed to gain the upper hand after a kill by outside hitter Sonia Abuel-Saud (‘13).

The Gators continued on their rampage, extending their lead to match point, 20-24.

But Paly came back, fighting off five match points off kills by middle blocker Melanie Wade (‘12), Kuppe and Whitson, finally winning the game 27-25.

“It helped to play with a sense of urgency,” Whitson said, “because we needed that next point. We needed to do that every single point of the match.”

Paly’s serving woes were finally resolved in the fifth game, as they started the game off leading 8-4.

“It was the combination of luck and clutch plays,” Winn said. “We had some clutch digs.”

Although Sacred Heart made a run late into the game, intermittent Paly kills proved too much for the Gators to overcome and a kill by middle blocker Jackie Koenig (‘12) sealed the comeback.

“We know we can come back from anything,” Whitson said.

Paly is the number one seed in the Archbishop Mitty tournament, and plays the 16th seeded Santa Ynez Pirates on Friday at 4:00 p.m.