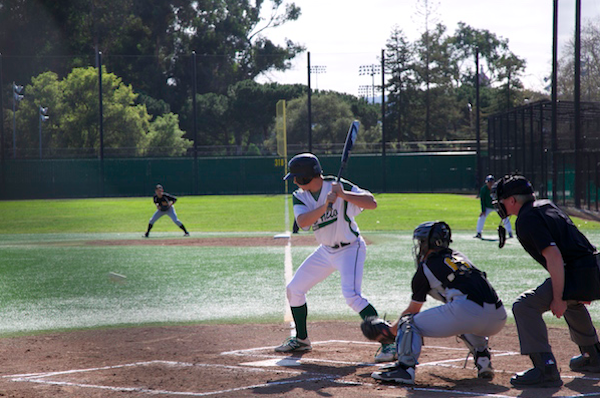 On Wednesday afternoon, Paly baseball took down the Mountain View Spartans 9-2 in its league opener.

“Our team was fantastic, a lot of energy, they came out strong,” head coach Pete Fukuhara said. “Every single guy came out ready to play, and they did a really good job for the league opener.”

The Vikings started the first inning off strong both defensively and offensively, with Isaac Kasevich (‘15) as the starting pitcher. The top of the first began with a flyout to Ben Cleasby (‘17). Following a Mountain View single, the Vikings then closed the top with a 4-3 double play.

The bottom of the first started off with Lewis doubling to right field, and a single hit by Cleasby that moved Lewis to third. Plambeck’s single then allowed Lewis to score for the Vikings. Hull’s single left the bases loaded, with Plambeck on second and Cleasby on third. Olmstead then singled, bringing home Cleasby and giving the Vikings a 2-0 lead against the Spartans. Lawrence Han (‘16) followed with an out at second, but his out brought home both Plambeck and Hull to add two more runs to the Vikings’ lead. Jung-Goldberg followed with a single, allowing Olmstead to score and boost the Vikings’ lead to 5-0. With a bunt, Schoeben was safe at first and sent Jung-Goldberg to second. Stern followed with a double to bring home Jung-Goldberg. Returning to the top of the batting order, Lewis struck out for the Vikings’ second out of the inning. For his second at-bat of the inning, Cleasby tripled to right field to send both Stern and Schoeben home. Plambeck then hit a flyout to wrap up Paly’s strong inning, sending them to the top of the second with an 8-0 lead.

The Spartans came back fighting in the top of the second inning scoring their only two runs of the game against Kasevich’s pitching. With four singles, Mountain View scored its first run. Plambeck caught a pop-out for the first out of the inning. The next batter was tagged out at first, but brought home the Spartan on third base to bring the score to 8-2. The Vikings closed out the top of the inning by tagging the next batter out at first.

With a quick bottom of the second and top of the third, neither team scored until the Vikings put up their final run. In the bottom of the third, Schoeben hit a single and then stole second. Stern then doubled to send Schoeben to third. After Stern’s double, Lewis singled to bring Schoeben home and raise the final score to 9-2, as the rest of the game remained runless.

Kasevich pitched the first six innings for the Vikings allowing only two runs, and was relieved by Corey Bicknell (‘15) in the 7th inning.

“Kasevich was fantastic on the mound, he pitched really well,” Fukuhara said.

The Vikings were happy with their win and are excited for the rest of the season.

“I think we have the train rolling, the boys play with a lot of energy,” Fukuhara said. “They are playing really well, they are coming out everyday ready to play, so I think we just need to maintain the same attitude every time we come out.”

Although the team has showed a powerful start to its season, it will need to continue to remain competitive as the season continues.

“Like our coach says, we’ve got to step on the throat and twist… we’ve got to come out strong and stay strong,” Lewis said.

Baseball will play its next game against the Spartans on Friday, Mar. 13 at 4:00 p.m at Mountain View High School.