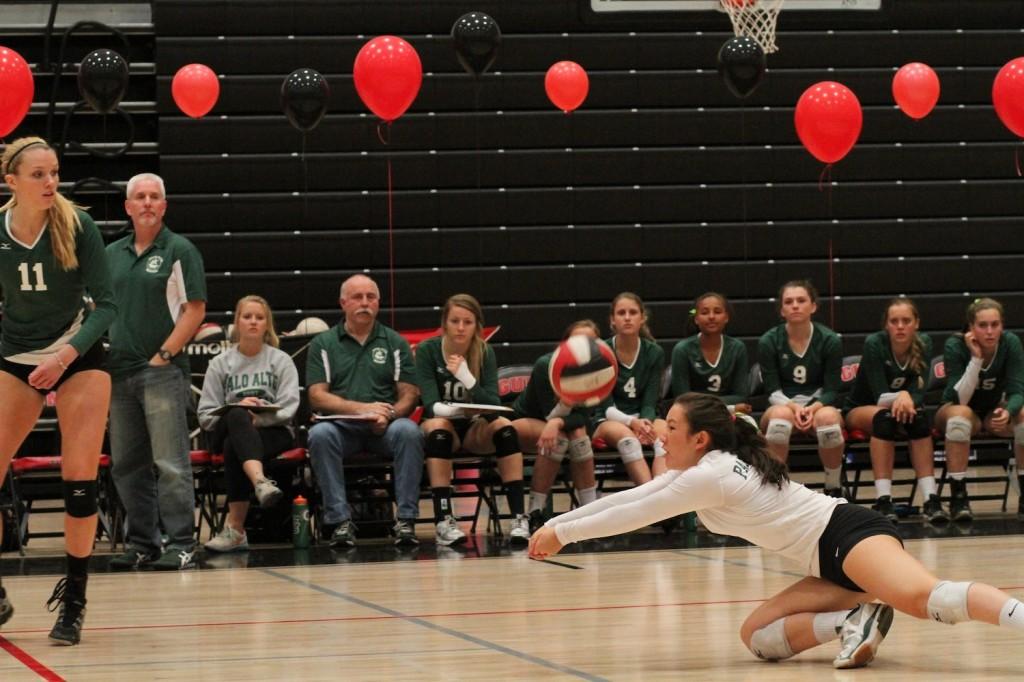 Keri Gee (’14) digs a spike from the back row. The Vikes went on to defeat Gunn for the second time in league.

For the second time this season, the Lady Vikes conquered Gunn High School but this time in Titan territory. The match took place on Thursday in the Titans’ brand new gym on their senior night.

Paly started off strong in the first set with a kill by Becca Raffel (’14) to earn a 4-2 lead. With more kills by Raffel and Jade Schoenberger (’15), Paly maintained their lead, bringing the score to 14-8. After a few errors on Gunn’s part and another kill by Schoenberger, Paly claimed the first match 25-13.

“The middles had some fun today because we had a shorter block up against us,” Lauren Kerr (‘14) said. “Everyone really came together as a team with a lot of energy tonight and it was just a really fun game.”

In the second game, Paly started off trailing Gunn 7-5. Kills by Kerr and Raffel brought Paly back into the game and helped secure the lead. Claire Dennis (’16) also had multiple kills, pushing Paly ahead 20-13. Paly’s offense proved to be stronger than Gunn’s because Paly won the second set 25-14.

“At times our defense against the outside hitters was off,” coach Dave Winn said. “We weren’t slowing down their outsides enough…That’s what we’re gonna work on in practice tomorrow”

In the third set, Paly struggled through multiple serve receive errors and out of bounds hits. The Vikes had trouble catching up with Gunn’s lead in the first half of the set and found themselves behind 12-7. However, Paly’s offense became more alive in the second part of the match with numerous kills by Schoenberger and Raffel. The Lady Vikes pulled ahead of the Titans 22-18. After yet another kill by Kerr, the Vikes won the third set 25-19.

“We played very well,” coach Dave Winn said. “It was nice that Gunn stepped up in the third game and pushed us as much as they could, but we definitely played well and the stats will probably show that.”

For their last league game of the season, The Lady Vikes will face Los Gatos high school this Thursday at 6:45.