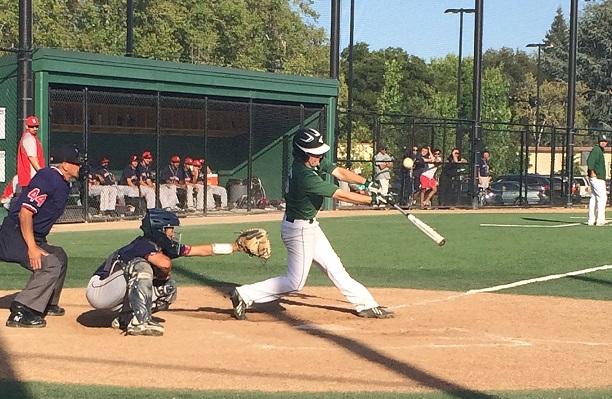 Owen Plambeck ('16) hits a pitch in the sixth inning. The Vikings took second place in SCVAL.

The Saratoga Falcons took first place in the Santa Clara Valley Athletic League (SCVAL) on Friday afternoon, as Paly fell 13-4. It was the third game in the three-game series for the SCVAL finals between Saratoga and Paly. On Tuesday, the Falcons took the win at Paly 8-4, and yesterday, the Vikings won at Saratoga 19-4.

“I think we came in a little cocky since we blew them out at their place; we were just going to come here and blow them out,” Phil Lewis (’15) said. “We didn’t have our ace on the mound, and they just hit us really well, and we didn’t hit. That’s it: they just hit better than us.”

In the first inning, neither team scored.

As the second inning began, the Falcons’ second hitter hit a home run. The Vikings did not score when they went up to bat, and the inning ended with the Vikings behind 1-0.

The third inning was when the Falcons got their great lead.

“We threw the ball at the plate and they hammered it,” Coach Erick Raich said.

The inning opened with a double. The next batter got to second base, and the third batter was intentionally walked, and the bases were loaded. The Falcons scored three runs and were up 4-0 when Isaac Kasevich (’15) replaced Kannappan on the mound. After one pitch and an error in getting the ball off of a bunt, Kasevich was taken out and Danny Erlich (’14) went in.

The Falcons scored again when a pitch went behind Austin Kron (’14) at the plate, and next when the ball was hit and rolled past second base. Up 7-0, the Falcons did not score again as Erlich struck out two batters, and an out at second ended the inning.

Up to bat, the Vikings could not match the Falcons. Despite Anthony Lim (“14) and Laurence Han (’16) both getting on base, a safe call at first was overturned and the inning ended without the Vikings getting on the board.

“We didn’t go out there and really attack, we were kind of waiting for the perfect pitch, and we had to go look for the fastball,” Austin Kron (’14) said.

The fourth inning passed without a score change; in the fifth inning the Falcons increased their lead to 10-0. When the lead was 9-0, Erlich was replaced by Corey Bicknell (’15). With runners on second and third, a the ball was hit to right field where it was caught and the Vikings went to bat.

Up first in the fifth inning, Kron hit a solo home run to put the Vikings on the board. The next two batters, Noah Phillips (’14) and Lim, both got on base, but no other hits where made to give the Vikings any more runs.

Bicknell walked the first Falcon batter in the sixth inning, and after two more hits the Falcon lead increased to 11-1. The bases became loaded, and a hit to right field pushed Saratoga ahead 13-1, the score at which the inning ended.

When Paly went up to bat, Lewis and Jack Cleasby (’14) both got on base. The Falcons’ pitcher changed for the only time in the game, and Owen Plambeck (’16) hit an RBI. Kron then hit his second home run of the game, bringing Cleasby in as well for the Vikings to minimize Saratoga’s lead 13-4.

Justin Hull (’16) pitched the seventh and final inning of the game, and did not allow for any more Falcon runs.

The Vikings did not score at their time up at bat in the seventh inning either.

There was not great success in what the team had been focusing on going into the game.

“[We focused on] throwing strikes, playing catch, and hunting fastballs,” Raich said. “We didn’t do a very good job of any three of those.”

The team knows that hitting is where it can improve the most, along with defense.

“[We need] or the pitchers just to throw strikes, and hit around the yard, and have the defense just do their job and get the outs,” Kron said. “At the plate, go out there looking for fastballs, because the breakers aren’t the best pitches to hit.”

Finishing second in SCVAL, the team will head to into California Coast Section (CCS) next week.

Raich has a list of key factors that the team will need to make sure they tune up on before their next game.

The team will play in CCS next week on Tues. or Wed., time and location TBD.