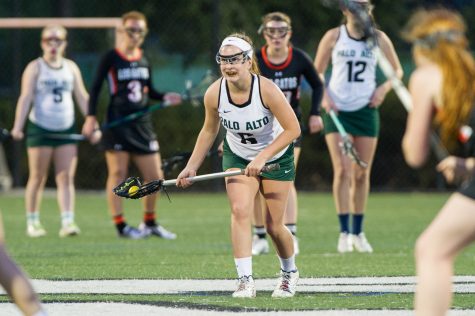 The Palo Alto High School girl’s lacrosse team defeated Leland with a score of 13-5 last Tuesday. The team lost to their long time rival Los Gatos twice in the previous week. Overall, this game will get the girls back on track.

The goalie Mattie Orloff (‘18) was injured in warmups. She was immediately replaced by Teagan Felt (‘19).

Quinn Knoblock (‘17) scored two goals in the first 30 seconds making the score 2-0. The Vikings were dominating with the ball on the other team’s side of the field almost the entire time. They continued the domination with Lia Salvatierra (‘19) scoring two in a row. With 11 minutes left in the first half, the score turned 4-0 with the Vikings in the lead.

Just when everything seemed leaning towards the Vikings, Leland was able to score their first goal with ten minutes left in the first half. Charlotte Cheng (‘18) also went down with a knee injury.

In the second half, the Vikings widened its advantage to three with Knoblock’s goal. Ramsey, Sarah Shader (‘18) and Staiger extended the lead to a score of 12-5 with eight minutes until the end of the game.

Kaitlyn Chiu (‘17) scored two minutes before the end of the game, secured Paly’s victory against Leland in game score 13-5.

Salvatierra who scored multiple times in the game commented, “We played well considering how the injuries impacted us, we could have gotten the score up more though.  Leland is one of the easier teams to play, so when we face off against harder teams, our injuries will show through on the field a lot more.”

The head coach of the team Jamie Nesbitt said, “[The girls] started off well, but quickly slowed things down, and looked a little tired. Unfortunately it was a day of many injuries, and we definitely let that get to us mentally. I am happy with the way we rallied and finished the game.”

The girls lacrosse team is playing Saratoga at 7 p.m. on the following Friday.