A Blast From the Past – The Viking Magazine

A Blast From the Past

As the class of 2020 graduates, decked out in green and white, they reminisce about their times at Paly. Whether it be a rivalry football game against Los Gatos or going all out for Spirit Week, these memories will last a lifetime...at least according to George Talman. We sat down with Talman, Palo Alto High School class of 1952, who relayed a series of stories about his life and memories as a Viking and Palo Alto resident. As he recounts what happened 68 years ago, we wonder; what will remember from our time at Paly 68 years from now?

Today, dogs on campus are no rarity, with service dogs coming every Wednesday. But back in Talman’s time, dogs were not as welcome on campus, as they were seen as dangerous. Despite this, the first time I talked to Talman, he told me about this little black dog named Henry. Although word on the street was that he belonged to the custodians, no one really knew who owned Henry. Henry showed up everyday to school and, prejudices against dogs notwithstanding, was loved by everyone on campus. “Nobody shooed him away,” Talman said. “Everybody loved him. We gave him something to eat.” Talman also told me about a hidden gem in the 1952 yearbook. Henry was so loved on campus, he even got his own picture, sitting alongside all the seniors.

When were Paly athletics the most dominant? 2006, when Jeremy Lin led the boys basketball team to a CIF title? 2010, when the football team won their first State Championship and Girls Volleyball won their first State title? Or in 2019, when the girls golf team made history by clinching the State Championship? According to Talman, 1951 and 1952 are considered the “Golden Age of Paly Athletics.” There were no State Championships back then, but the classes of ‘51 and ‘52 went undefeated for two consecutive seasons in football. But Paly did not just distinguish themselves for their dominance in football, as the Vikings were also at the top of their game in swimming. “We had the best swimming team in the country, high school and in Paly history,” Talman said. “We had the best team in the history of Palo Alto High in swimming.”

Throughout American history, there have been events where everyone remembers where they were when they happened. The assassination of Presidents Lincoln and Kennedy, as well as the September 11 attacks on the Twin Towers are some of those most memorable events. Living through the assassination of Kennedy, the Watergate scandal and more, Talman most vividly remembers the attacks on Pearl Harbor. He had been playing with friends and noticed the streets were really quiet. He went home and saw everyone gathered around the radio. Talman remembers that the children couldn’t get any gum packs because they all went to the soldiers, and to simulate stockings, women would use brown make-up. Instead of having natural disaster drills at school, they had air-raid drills. He even remembers how one Japanese girl was taken out of Paly.

In Downtown Palo Alto, on Emerson Street, resides a small cigarette and tobacco store called Mac’s Smoke Shop. The building standing there today is the original shop, built back in 1934. Talman worked there at nights during graduate school. He enjoyed it because everyone came into the shop and he got to meet a multitude of people including the Stanford Baseball coach. Talman worked for the original Mac, and once he passed away, he worked for his son. The logo for the smoke shop is the original Mac. “When you go in there and there’s the Mac Smoke Shop sign up there, they have a guy smoking a pipe on the side,” Talman said. “That’s him. That’s his profile. I’d recognize him any place.”

It started as Paly vs. Gunn, then transitioned to Paly vs. Los Gatos. Who was Paly’s rival before Gunns’ founding in 1964? The Sequoia Cherokees. Whereas Paly was only a three-year school, Sequoia was a four-year school and had almost four times the amount of kids attending. Paly had a meager 800 students while Sequoia had 3,000. Although Sequoia had many more students, Paly crushed Sequoia in almost every sport. In 1950 and 1951, Sequoia was dominant, but during the “Golden Age” Paly took control.

10 years after graduating, Talman decided to student-teach at Paly. While he was student-teaching, the wrestling team was going to be taken over by a gymnast. The coach soon learned Talman was student-teaching Spanish, and that he happened to know his way around a wrestling mat. They got him a temporary credential and he became the new Paly wrestling coach. The last match of one of his seasons was a tense battle between Paly and Ravenswood for the championship. Ravenswood dominated athletics, beating Paly in basketball almost every year except when Paly came close in 1962. Both teams were undefeated in the season, and Paly had to win the last five matches and pin Ravenswood to clinch the title. “And we did,” Talman said. “And we beat them by one point, so we won a championship.”

Hod Ray: The Man, The Myth, The Legend

Hod Ray Field: the location of Palo Alto’s very own Friday Night Lights. The namesake a tribute to the notorious football coach, Hod Ray. Ray coached football at Paly while Talman was in high school until Ray unfortunately died when Talman was a junior. Talman greatly admired Ray as a coach. “Legendary football coach,” Talman said. “Legendary even then.”

The People that Inspired Bill Gates and Steve Jobs

Everybody knows of Round Table Pizza. Widely considered to be one of the best pizza food chains in the United States, the franchise was started in Menlo Park. Two kids in the class of 1951 were high-school dropouts. Their names were Bill Larson and John Graham. “They were just kind of numbnuts,” Talman said. “That’s really it. So they had to do something with their lives.” In order to create an environment where their friends could hang out and drink beer, Larson and Graham decided to open up a pizza parlor in Menlo Park on El Camino. They decided to call it Round Table Pizza and soon became multi-millionaires. 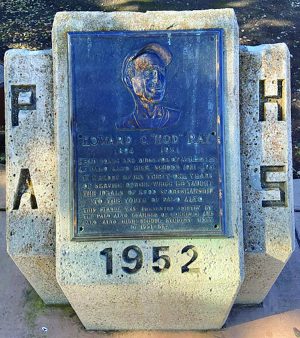 Friends to the Last Breath

On January 25, 2020, the Charlie Wedemeyer All-Star game took place. Wedemeyer taught and coached football at Los Gatos. Talman and Wedemeyer became friends when Talman was coaching wrestling at Los Gatos. “Instead of eating lunch, he and I would go to the gym and play one-on-one basketball,” Talman said. “We did this for two years.” In the two years they played at lunch, Talman never won a single game. Wedemeyer contracted ALS but managed to coach Los Gatos to a CCS Championship out of a golf cart. According to Talman, Wedemeyer would mouth the plays to his wife who would then transfer them to the assistant coach. Years later, Talman saw Wedemeyer give a talk at a church, but didn’t go up and talk to him because he thought Wedemeyer wouldn’t remember him. His friend convinced him to go up and say “hi.” “I was way at the back and walked up the center aisle,” Talman said. “And the nurse looked up at me and says ‘Is your name George?’” Talman started crying because even though Wedemeyer had ALS, he still remembered Talman.

What is your favorite Paly moment?

A Blast From the Past