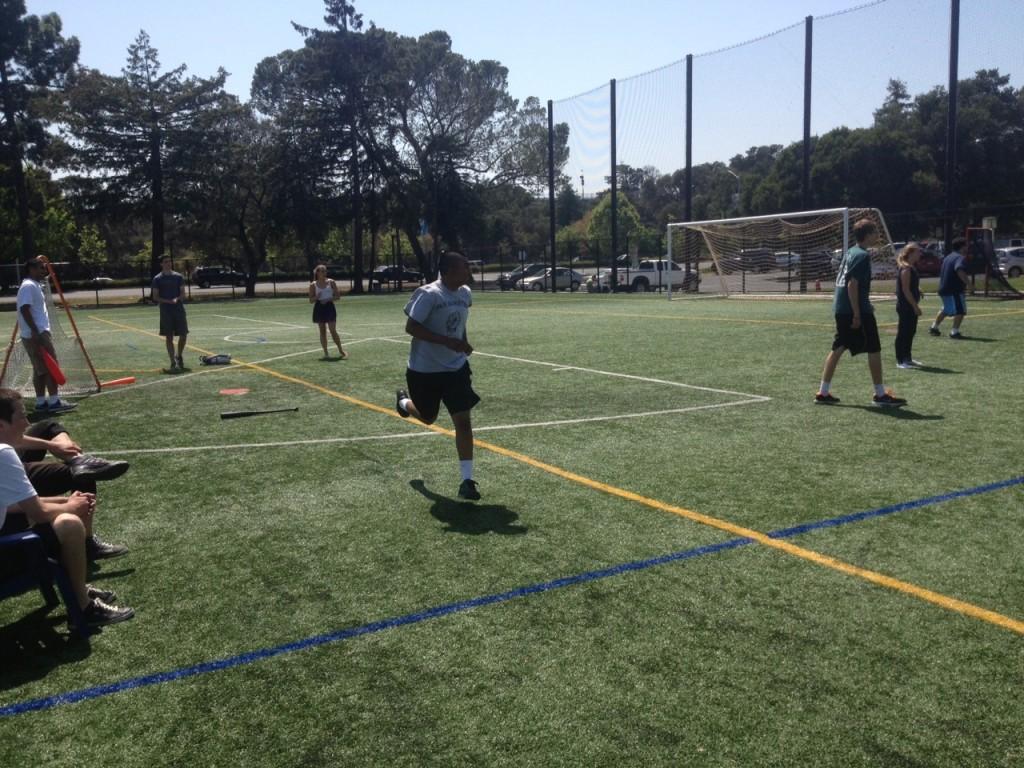 Rohit Ramkumar ('13) runs out a single while using the infamous craked Nerf bat (even though it clearly has the most pop).

This past Tuesday, The Viking took on The Campanile in a friendly game of wiffle ball. In a thriller, The Campanile barely scraped by. Fueled by their new Editor-in-Chief (or in their peculiar Campy speak, “Theed”) Charlie Dulik (‘13) and his three wind-aided home runs, Campy won 8-5.

By virtue of me even writing this, anyone from Campy (or anyone regardless) who actually reads this will just think I’m bitter. But let me put it out there: I’m not.

There are just a few factors that need to be taken into account when considering this game, one of which is the clear player advantage for The Campanile. Wait…what? The newspaper beating the sports magazine in terms of players? What? Yes. This is true.  Throughout the entire game, The Viking could count on basically six players being there, as a few Vikings left to go recruit others and others simply left.

The other factor would be the wind. And the egregious HGH use by Mr. Dulik. And quite possibly his corked bat. Who knows, maybe he was using the same flaxseed oil as Marion Jones. It should also be noted that Mr. Dulik entered midway through the game. What was he doing before he came? Juicing up? Probably.

At this point, I’d like to skip the game recap part here and just highlight a few people that were huge game changers. One of these x-factors was Josh “The Specimen” Arfin (‘13). As Arfin entered the field, his swagger, demeanor and appearance instantly took the breath away from all those in the crowd. This did not detract from his snazzy performance at the hot corner, with snappy throws to first. Nor did it detract from his play in left field. Why, with the Green Monster out there, it’s a wonder how he did anything.

The play of the day, though, was from our own Features Editor Austin “AP” Poore (‘13). With the Vikings down in the bottom of the second, Sam “Dirty Dod” Dodson (‘13) was on third and threatening to score. Kyle Stewart (‘13) at bat posed a huge threat to the Vikes, who were in jeopardy of losing their 2-0 lead with other runners on base. Luckily, Stewart hit a liner to AP, who, unlike some others on the team, actually fielded it cleanly. As he grabbed it off the stone base of the lax field, he spun around. Due to his peepers (like an eagle) he expertly turned around and locked on to Dod tagging from third.

Suddenly time seemed to stop as the entire field waited as a white speck flew threw the air. The holes in the wiffle ball allowed AP to expertly nab Dod right between the shoulder blades. Unfortunately, as the staff was (as expected) more interested in the game than videotaping the game, we have no footage of this fantastic feat. And therefore, my words do this amazingness a disservice. However, let me just say this: in the words of the God (i.e. Barney Stinson from HIMYM [How I Met Your Mother for all those haters out there]), that was LEGEND….wait for it…

Unfortunately, this game was not what we at The Viking had hoped for. We had next to no seniors playing, and therefore were definitely down talentwise. Let this be a challenge to all you at Campy. When we, The Viking, can strum up enough of our talent to take you on in a fair battle, we challenge you to another wiffle ball duel. And be warned, we will take you to school. Given that we are playing at a school and stuff.

….DARY. And thats exactly how our rematch will be. LEGENDARY. Because we WILL win. Be warned.