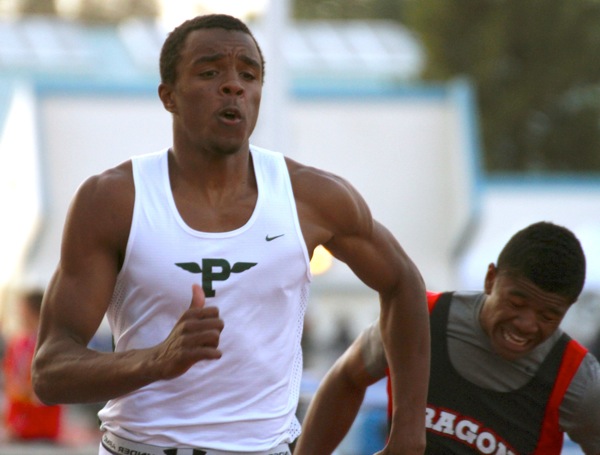 E.J. Floreal (’13) took fourth in the boys’ 100-meter dash today in the sub-100 degrees Fahrenheit heat with a time of 10.70 seconds and third in the boys’ 200-meter dash with a time of 21.38 seconds. These times were slower than his times of 10.64 and 21.24 seconds in the preliminaries, respectively, but were still enough to earn 10 points for Paly in the finals team competition.

Floreal expressed his disappointment with his finishes, not being “satisfied with them” because he felt he could have done better, but was still happy with the experiences he gained from the meet, especially because this was his first season running the events he participated in.

“Maybe next time I won’t be as nervous and I’ll know what to expect from the competition,” Floreal said. “I don’t know if I was really nervous but it was kinda shocking to run against runners who are that fast because I haven’t seen that before this year.”

One of the runners to which Floreal refers is Khalfani Muhammad (’13), who won both the boys’ 100-meter and 200-meter dashes with times of 10.52 seconds and 21.15 seconds, respectively. The junior from Notre Dame (Sherman Oaks) was the top qualifier in both events and ran a personal best of 10.44 seconds in the 100-meter dash in the preliminaries. In comparison, Floreal was predicted to finish fourth in both events going into the finals.

Looking back on the season, Floreal is proud of his team’s accomplishments, which included winning the Central Coast Section Championships for the first time in Paly history, and his personal successes.

“I’m pretty proud of my teammates; a lot of them were able to step up at a big and important meet,” Floreal said. “It’s just been a blessing to have so much success and get my name out there too.”

While the boys’ track team will graduate State qualifiers Kirkman, M. Gates-Mouton and  Nikolai Solgaard (’12), who took 17th  in the 800-meter run with a time of 1:54.36 minutes in the preliminaries, a strong roster highlighted by Floreal and others such as jumper Victor Du (’13) and 400 meter relay anchor Sullivan remains.