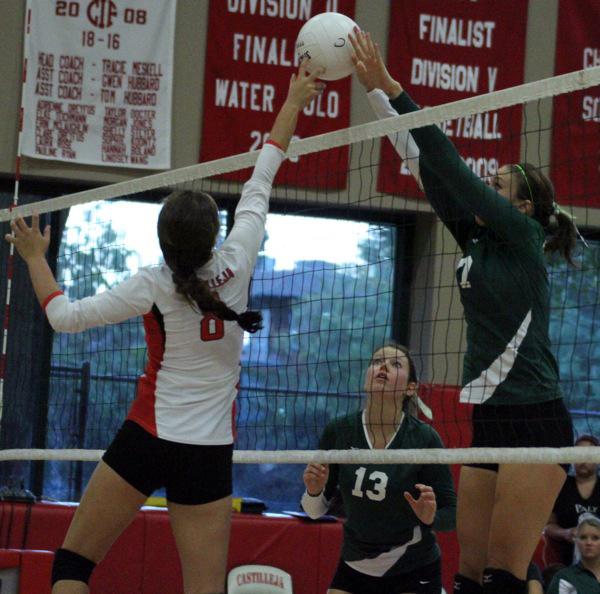 Bella Graves (’14) fights to tip the ball over the net in the second set.

Although the team is still getting used to its 10 new players, the players were pleased with their team’s performance during the game.

“I think we played pretty consistently, although there is always room for improvement,” outside hitter Becca Raffel (‘14) said.

The Lady Vikes took a quick lead in the first game of the match, defeating Castilleja 25-16.

The Vikings established their dominance early in the first set with a pancake (a type of dig where the player keeps the ball alive with the back of her hand) by Keri Gee (’14),  and three kills each for Raffel and Bella Graves (‘14).

The Lady Vikes began the second game with a 2-0 lead. However, Paly’s miscommunication and numerous Castilleja blocks allowed the Gators to take the lead 6-5.

Before long, Paly rallied and, with the help of a pair of kills by Jade Schoenberger (‘15) and Raffel, the team retook the lead.

Nevertheless, the second game remained close with Castilleja quickly tying it up at 13.

Even though the team wasn’t leading throughout the second game, Raffel retained confidence in her teammates.

“I still knew that we could rise to the challenge,” Raffel said.

Paly took the lead again when Gee dove to save a ball hit by Castilleja.

The lead continued to waver between the Lady Vikes and the Gators. However, after being tied at 20 points, Paly surged ahead and won the game 25-20.

“In the second set, we had a little trouble in our serve-receive,” Winn said.

The Lady Vikes’ troubles continued at the very beginning of the third set, when the Gators began to capitalize on the mistakes of main hitters Shelby Knowles (’13) and Raffel. However the Lady Vikes did not let that pattern last long and quickly built a lead.

“In the third set we played solid all around, with good serve-receive, great serving,” Winn said, “Our serve was our strength today.”

The players and their coach alike believe that the team is improving and showing potential for the rest of the season.

“In the end it was a good book,” Winn said. “In the middle I didn’t like the story so much but you know, sometimes that’s volleyball.”

The Lady Vikes have high hopes for the rest of the season following the dominant performance.

“We are improving gradually and we want to win league,” Lauren Kerr (‘14) said.

The Lady Vikes will play again on Thursday at Kings’ Academy.