The first half of the game was very back and forth, with the scoreboard remaining unchanged throughout the period. Paly did suffer a loss on the field when Talia Malchin (‘17) was forced to come out off the field due to a cramp.

The second half kicked off with yet another injury when Chloe Japic (‘20) was ushered off the field after being struck in the head. Thankfully, no concussion symptoms were being shown by the end of the game so the team remains hopeful about her return to play.

Throughout the second half, the Vikings had trouble with their passing and struggled to get their shots in the goal.

“[Today’s game was] kind of a lackluster performance… It hurts because we weren’t able to score and we had a couple good chances,” head coach Kurt Devlin said when asked about his team’s performance on the field.

In the game’s last two minutes, the Lady Vikes had multiple opportunities to convert the ball and score, but failed to take advantage of them.

“We need to get more shots off… a lot of times [the ball] gets jumbled in the goal box so we need to work on knowing where our teammates are going to be and play them quick,” said Emily Tomz (‘18) when asked about what the team could improve upon.

The girls are hoping to bounce back in their next game against Fremont High School on January 24 at 3:30. 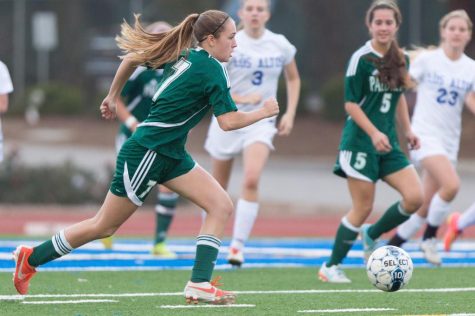