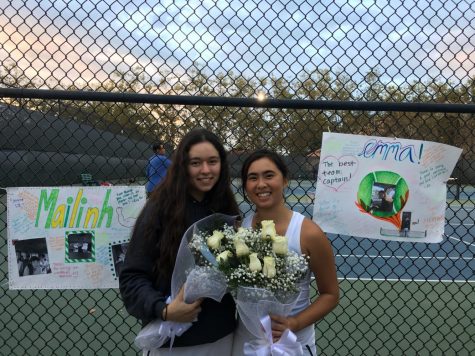 to Monta Vista 4-3 in a tough matchup this afternoon.

In the singles matches, Isa Cossio (‘19) was the only member of the Lady Vikes’ team to come out on top, beating her opponent 7-6 in the first set, then 6-2 in the second. The other singles players did not fare quite as well, but fought hard, with Anya Yakimenko’s (‘21) close three-set match acting as a great example of the tenacity each of the team members showed.

“Some of the girls really fought hard and came back and put together a really good second set, but couldn’t pull it out,” coach Andy Harader said.

“Rachel Owens continues to be the winningest player on the team, she’s a real scrapper and a fighter,” Harader said.

Tonight marked seniors Mailinh Truong and Emma Cockerell’s last league match at home, and both team members were sent off with posters, flowers, and the knowledge that they were a part of an incredibly competitive team during their final year at Paly. Saying goodbye to these two ladies also means looking ahead at what the future will bring, and Coach Harader believes it will be bright.

“We’re doing fine, we’re just a young team. We’re not able to win some of the matches, but each match is competitive, so a couple of years from now, we’re going to be pretty darn good,” Harader said.

Girls tennis plays faces off against Saratoga on Tuesday at 3:30.