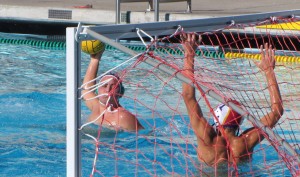 The Vikings started off the second quarter strong with co-captains Pinsker and Quinn Rockwell (’13) scoring the first three goals. Pinsker’s first goal came on a five-meter penalty shot. Paly gained back possession, and with yet another five-meter penalty shot, this time from Rockwell, found the back of the net. In a breakaway Rockwell passed the ball to Pinsker, netting another goal for the Vikings. However, with a slip in the Vikings’ defense, Monta Vista was able to score. Pinkser finished off the second quarter with another goal, making the score 6-4.

Cho started off the third quarter with a goal, giving the Vikings a three-goal lead. However, as Monta Vista gained possession, Paly’s defense slipped and allowed two goals. Pinsker responded with a backhand shot, his fifth goal of the game. However, Monta Vista countered to tie up the game at 8-8.

During a tense fourth quarter, Paly coach Matt Johnson received a yellow card from the referee.  With three minutes left and the score still tied, Cho finally gave the Vikings the lead. Rockwell kept the momentum up for the Vikings with a steal and quick pass to Pinsker, who scored. Pinsker racked up the last two goals of the game, bringing the final score to 12-8.

The Vikings were satisfied with their performance in the last two quarters, but see room for improvement.

“It was a good win, it shouldn’t have been that close, but we finished strong, so were happy about how we finished,” Johnson said. “Something that has been a problem for us all year is how we start games off, so we just need to focus on that and putting teams away early.”

Rockwell agreed that the team’s performance could have been better.

“I thought we should have destroyed [Monta Vista] but I think at the very end of the fourth quarter we kinda picked it up so I was happy about that,” he said.