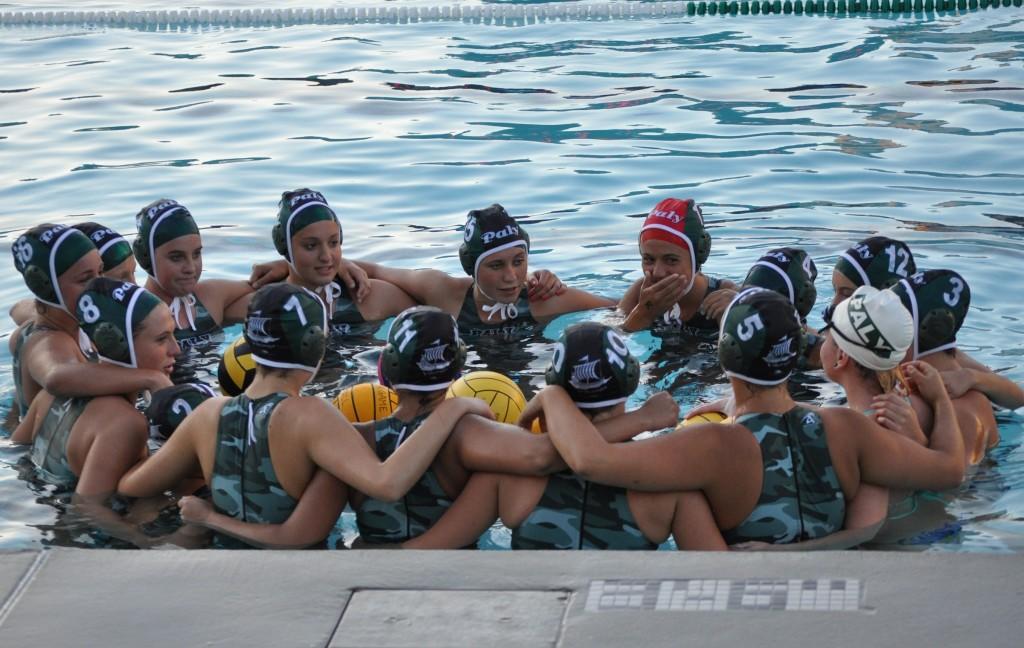 The Lady Vikes huddle up before their game against cross-town rival Gunn. This game was their first league game and also served as a foundation for improvement throughout the rest of the season.

The Lady Vikes got off to a slow start in the first quarter as Gunn won the first sprint and scored the first goal of the quarter. The first goal was followed by a missed shots from both Titans and Vikings, including Emma Wolfe (‘14) and Olivia Scola (‘15). Gunn finished off the first quarter with another four goals leaving the Vikings to trail with a 5-0 gap into the second period.

Gunn started off winning the sprint in the second and by the end of the quarter had put four more goals on the board to leave the score 9-0 at the end of the first half.

The Titans started the scoring in the third quarter with a five-meter shot, but the Vikings found the goal with a late shot from Izzy Kelley (‘17). Kelley’s goal left the score at 10-1 at the end of  a low scoring period.

The game finished off with a score of 13-1 after another three goals were scored by the Titans in the fourth quarter.

Though the Vikings had a low scoring game, both players and coach voiced their satisfaction with how they played.

“Well it was the first game and we do have a lot to work on, but I’m happy with how we played defensively against some of their top scorers” Tess Van Hulsen (‘15) said.

Coach Danny Dye echoed Van Hulsen’s remarks, explaining that the team played as they had planned.

“I don’t feel bad about today’s performance,” Dye said. “There were a lot of things that we actually did really well that we had planned to execute”.

Coach Dye stated that the first loss serves as an opportunity to improve throughout the season.

“[Today’s game is] a foundation to build on,” Dye said. “As the season progresses we are only going to get better.”

The Lady Vikes are looking past this first league loss with optimism towards the rest of their season and their future games.

“We just got to keep up the [positivity] and confidence from here on out” goalie and co-captain Hannah Bundy (‘14) said.

The Paly girls’ water polo team will play their next game at Homestead High School against the Mustangs on Thursday at 4:45.