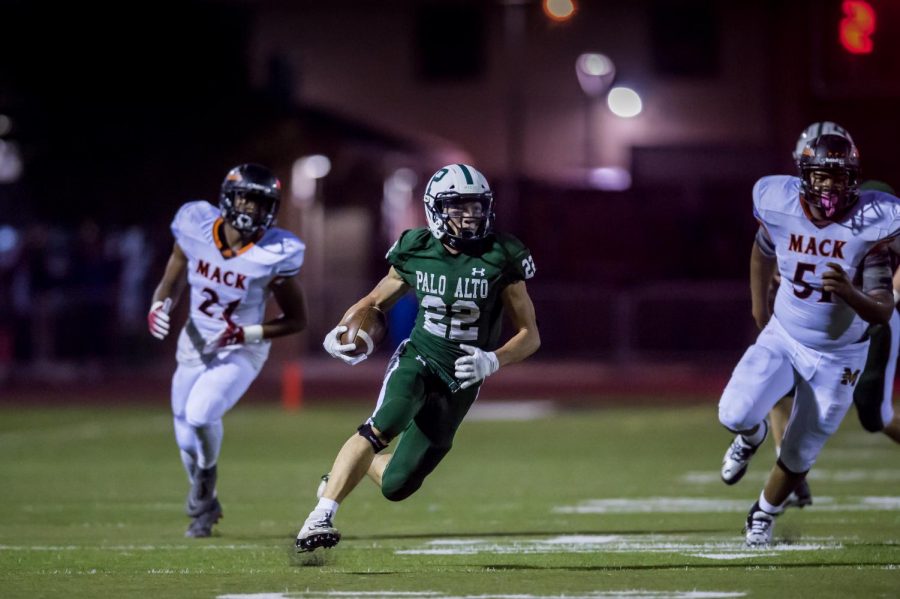 Last night the football team beat McClymonds High School by a score of 29-20. Although Paly had won their first two games and McClymonds was 1-1, the Vikings knew that this game would be no pushover. This belief was reinsured by how the game was started.

On the opening kickoff the Warriors took the ball to the house on an 81-yard return. This was followed by an interception on the first passing attempt from Jackson Chryst (‘19). After McClymonds was able to convert on this drive, the Vikings found themselves down 12-0 in the first quarter.

However, Paly put this behind them and Chryst (‘19) was able to connect with star wideout Jamir Shepard (‘20) on a 27-yard one-handed touchdown catch. This put the Vikings on the board, although still trailing 12-7.

Slowly but surely, Paly took control of the game, receiver Paul Thie (‘19) was able to put two touchdowns on the board, earning himself the GetSportsFocus Playmaker of the Game award. Running back Aiden Chang (‘19) was also able to punch in a 1-yard touchdown.

The Vikings defense was also able to rise to the occasion with two takeaways, an interception from Colin Giffen (‘20) and a fumble recovery from Dwayne Trahan (‘19).

Paly ended up being able to go on to win 29-20 after kicker Tyler Foug (‘19) was able to nail a PAT to make it a two-possession game with three minutes remaining.

Thie (‘19) was able to explain how the team is playing at such a higher level than last year, “We’re playing with such a high level of confidence,” Thie (‘19) said, “We know we’re the best team so we’re going to play like the best team.”