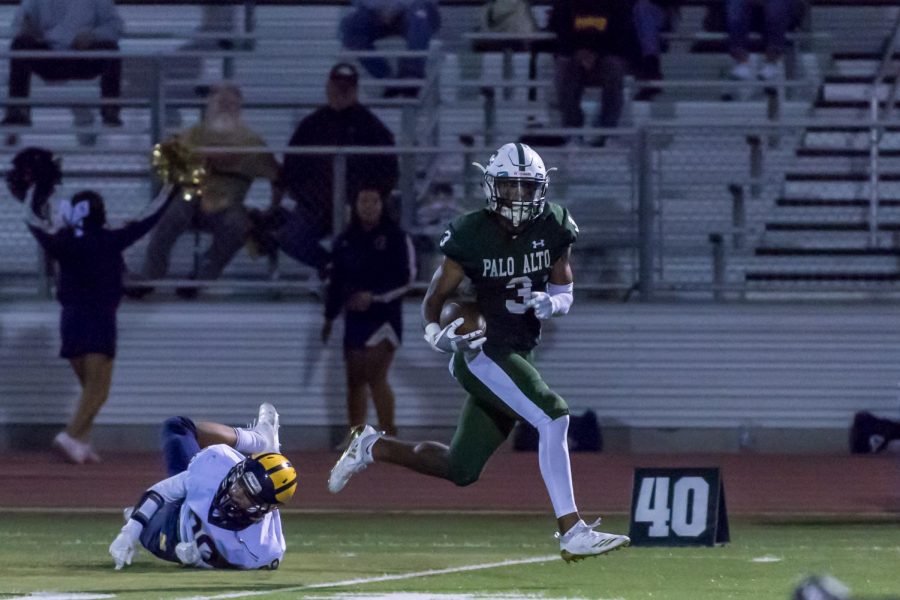 After an underwhelming performance last year, resulting in a 49-0 loss to Milpitas, the Vikings came out piping hot and were able to seal the game with a score of 41-13. The team advanced to 5-0, which is the most amount of wins they have had in a season since 2015.
Prior to the game, Offensive Tack Andres Jimenez (‘19) was confident and excited to play their first league game of the season.
“Each week we prepare the same, it is just like going into Mac [McClymonds], they are just as intense, if not maybe even a little more, so we have to go in with that same mindset,” Jimenez said.
At the beginning of the game the Vikings received the kickoff, but not long after, receiver Paul Thie (‘19) fumbled, which gave the Trojans possession on the 30-yard line. However, this did not faze the Vikings, Louis Passarello (‘20) came up big, sacking the quarterback, forcing a fumble, and returning it to the 10-yard line.
In the very next play Quarterback Jackson Chryst threw a fade pass to Jamir Shepard (‘20) to score the first touchdown of the game. Shepard was on the 2017 varsity team and remembered the beating they received by the same team.
“Our team hates losing and we regretted how we played against them last year and we came out this year with really high energy,” Shepard said.
The junior receiver went on to score a total of three touchdowns with two of them being 40 plus yards. On the ground, Aidan Chang (‘19) scored two touchdowns and had many impressive breakaway runs that lead to their offensive success.
On the defensive side, they stood tall all game; making stops and forcing turnovers to seal the win. The Vikings look to remain undefeated, taking on Wilcox away next Friday.