Female Underclassman of the Year: Emy Kelty – The Viking Magazine 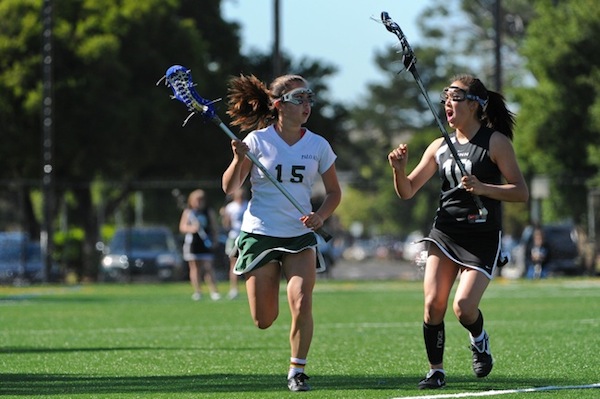 Emy Kelty ('12) drives down the field in a game against Gunn High School.

The ball drops on a badly timed pass and players swarm from all over the field to make the recovery, one player gets there first. With others still hustling to drop their sticks to the ground position, Emy Kelty (’12) swoops down and takes possession of the ball, creating yet another offensive opportunity for the Palo Alto High School girls’ varsity lacrosse team.

Usually, players are evaluated by stand out performance marks or statistics. The Viking, however, goes beyond record keeping and notices the behind the scenes play in order to define a well-rounded player. Kelty is this player. As a varsity athlete on three different Paly teams, cross-country, soccer and lacrosse, Kelty commands respect from all of her teammates and leads her team to success.

“In each sport I have a different persona,” Kelty said. “In soccer I’m little and calm, in lacrosse I’m speedy and aggressive, and in cross-country I’m motivated to pass more than I get passed.”

Her hard working attitude and self-motivation not only allow her to be a leader, but also a significant contributor to all of her teams.

Despite the fact that Kelty was only running cross-country to keep in shape, she ended up being one of the fastest runners on the team without previous training.

“Emy is one of the hardest workers on the team,” lacrosse coach Jen Gray said. “She doesn’t stop working until she gets it right. She takes personal accountability for her skills.”

As for soccer, Kelty was a starting midfielder. Mira Ahmad (’12), her teammate on the team expressed that Kelty is different from other motivational players.

“Watching Emy play makes me want to push myself harder when I’m tired because it seems like she has endless energy to play,” Ahmad said.

Kelty’s calm and consistent play inspires others to play with serenity. Her silent drive allows her to keep her composure while still ravaging the other team, never giving in.

“I don’t think twice about doing what she says on the field because I trust her so much,” Ahmad said. “She never does anything selfish on the field and is constantly working to make sure the whole team performs well and looks good doing it.”

Kelty also has strong relationships with all of her teammates on and off the field, making the bonds within her teams stronger.

In lacrosse, Kelty had the most ground balls recovered per game, 3.9, with 54 overall. She also scored seven goals and had four assists.

Kelty, however, was unable to fully devote herself to lacrosse because mid-season she started to find it impossible to cut quickly back and forth, an essential skill in lacrosse. An MRI then showed multiple fractures in her right foot. The doctor was stunned as Kelty told him that she had been playing on the foot for the past two months, and that she had gotten X-rays that stated her foot was fine.

“When I’m in the zone concentrating on the game, I forget about the pain,” Kelty said. “What stopped me was that I couldn’t deal with the mental frustration of competing a high level without being able to do my best.”

Kelty’s foot was encased in a boot cast, as she watched from the sidelines. Her mindset, however, of ignoring the pain to play for her team is what makes Kelty such a remarkable player and person.

“In all of my sports I’m just a very competitive person,” Kelty said. “I never settle for less than perfect, but I am always proud of myself for doing things that I didn’t think were possible.” 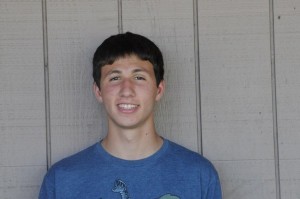 Brandon is a senior at Paly and has been on Viking for two years.  He enjoys practicing photography as well as running track and cross country.  He has...