Mind over matter – The Viking Magazine 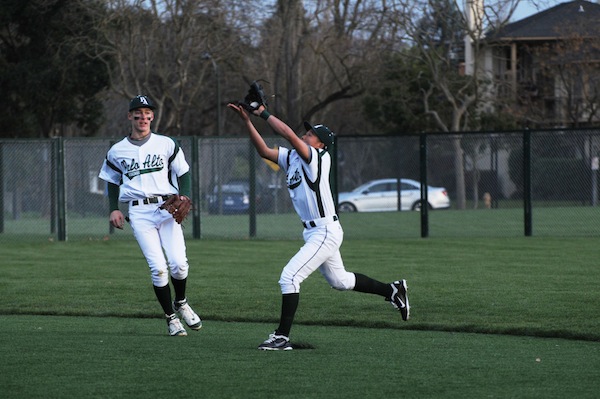 Paly third baseman Alec Wong ('12) goes in for the catch on the Paly baseball field. He joined the varsity baseball team his sophomore year, and has also played varsity basketball for three years.

Jump to Comments
Share on Facebook
Share on Twitter
Share via Email
Print
From a chess champion in fourth grade to a two sport varsity athlete, Alec Wong (‘12) brings another element to the athletic arena.  For many, the ideal “male varsity athlete” fits a preconceived physical image.  Yet a look at the various Paly varsity athletes suggests that this image does not always exist. Wong is one of these athletes; his work ethic and ability to utilize the mental side of the game proved to be more enduring qualities than his raw physical build.
“I’m not exactly the most physically gifted, I think that’s pretty obvious,” Wong said.
Wong began his Paly varsity career as a sophomore for the baseball team. Just one game into the season, he was selected to fill a temporary gap for the team in the infield. He impressed the coaching staff with his performance enough to stay for the remainder of the season.

“We were struggling a bit so we said, ‘Wong, get in there,’” head coach Eric Raich remembered. “He goes in, gets two rocket hits and plays like he’s been doing it his entire life. We looked at him and said, ‘He’s not going back down.’”

From that point forward, Wong remained on the varsity team and proved to be a valuable asset. Following his sophomore season on baseball, Wong also joined the varsity basketball team as a junior, which he captained for the 2011-2012 season.

Wong’s success in his sports was not effortless. Instead, he relied on the mental aspect of competition.

“I’m not the biggest or strongest guy,” Wong said of his 5-foot-9 inch frame. “I have to use the mental aspect of the game a lot more.  Baseball is more of a mental game; you have to think through situations before they happen. Basketball is a lot of quick thinking.”

Wong called on a quality he discovered as a mere ten-year-old and learned to transform it into a critical device.

“In fourth grade, there was a chess club after school. A lot of my friends did it … I adopted it pretty quickly,” Wong said.

Throughout his years playing basketball and baseball, Wong found useful similarities between the chess board and the court and field.

“There are definitely comparisons that can be made [between the mental side of sports and chess],” Wong said. “There’s a lot of deeper thinking. You can’t really only see on the surface of the game, you really have to think out each move if you’re going to set something up.”
As the starting point guard on the basketball team, Wong relies on his canny decision making to control the pace of the game.

“Something that really separates [Wong] from the rest is his knowledge of the sport,” basketball teammate Aldis Petriceks (‘13) said.  “He’s a really good student of the game.”

Wong learned to appreciate the benefits of understanding the intellectual qualities of a game, as opposed to relying solely on skills.

“To be a great player you have to be well rounded in all aspects of the game,” Wong said. “A basketball IQ is knowing what to do in certain situations, especially when there is high pressure.”

“My coach picks on the little things a lot,” Wong said.  “I know a lot of the other players wouldn’t really appreciate it as much as I do, [but] I think I really understand. Those little things add up.”

This attention to deta

il reflects Wong’s relentless work ethic; that, when paired with his natural ability, creates quite the varsity athlete.“He really e

mbodies what an athlete should be,” Petriceks said.Though perhaps not physically, Wong stands out as a player.“He wasn’t the biggest guy on the court but he was very physical and his desire to succeed made him bigger than everyone else,” Sax said.Baseball teammate Jack Witte (‘12) a

ddressed how this quality impacts Wong’s performance on the playing field.“[Wong is] a smart player, he always knows where to go with the ball,” Witte said.According to baseball teammate and friend Jacob Lauing (‘12), Wong attained a keen understanding of the strategies behind the plays. Like in basketball, Wong was able to channel what physical abilities he did have, his quick reflexes, to become an esteemed varsity player.“He’s not the biggest, he’s not the strongest, he’s not even the fastest, but his quickness sets him apart,” Lauing said.

Wong’s commitment to the basketball team throughout his high school career earned him the position as the sole captain of the season.  Wong’s character as a relentless worker has had a significant impact on his teammates.
“[Wong] inspires us all to play better,” basketball teammate Kenny Jones (‘13)
said.  “He’s a really good captain because he was probably the hardest worker on the team and pushes everyone to go harder.”

Wong embraced the leading role and achieved the appropriate balance between being a friend and being a leader.
“He was a great captain and a very vocal leader,” Petriceks said. “He’s actually a pretty quiet guy but when he needed to be loud he would be loud. He would tell you what you’re doing wrong.”

Whether on the basketball court or on the baseball field, Wong is a reliable worker.

Some encourage their teammates verbally, but Wong takes his own approach to it.
“He doesn’t really have to speak a lot, it’s more leader by example,” Raich said.

Motivated by what may have appeared to be physical disadvantages and perhaps even low expectations, Wong developed a strong mental edge over his competitors and teammates, and rose as a compelling leader.

Even when Wong found success, he continued to develop both his mental and physical game. He honed an overlooked quality into a sharp tool.