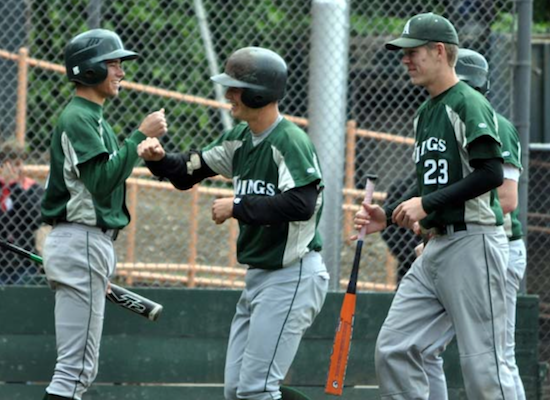 Joc Pederson ('10) celebrates with teammate Christoph Bono ('11) after scoring for the Vikings.

The Los Angeles Dodgers could very well be adding a Palo Alto native to their already star-studded roster this year. Paly’s own Joc Pederson (’10), who was drafted by the Los Angeles Dodgers in the 11th round of the 2010 Major League Baseball (MLB) Amateur Draft, will be joining the Dodgers during the franchise’s spring training held in Glendale, Ariz.

Pederson, with only four seasons of professional baseball under his belt, was invited up from his Chattanooga Lookouts AA team centered in Chattanooga, Tenn.

Earlier this month, Pederson was among 15 prospects who was invited to participate in the Dodgers’ annual winter development program. He comes into the Dodgers’ camp ranked as the franchise’s No. 1 Minor League prospect, according to MLB.com.

Tough for the young outfielder, however, Pederson comes to the Los Angeles franchise competing against accomplished Major League All-Stars Matt Kemp, Andre Ethier and Carl Crawford, along with last year’s MLB All-Rookie, Yasiel Puig; this may cause Pederson to become a potential high-ranking trade candidate for Los Angeles.