The Ultimate Fan – The Viking Magazine 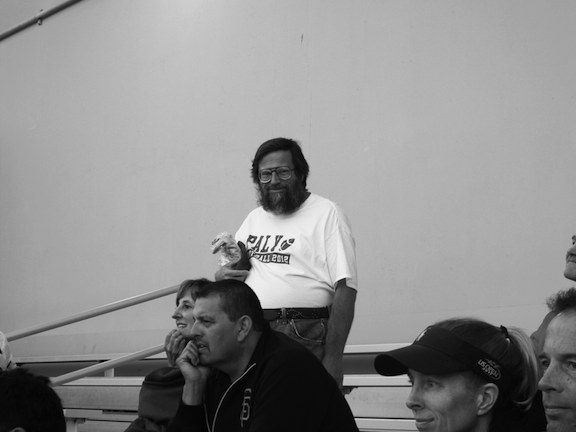 It’s Friday night and Paly football is playing the San Benito Haybalers for their home opener of the 2013 season. Students are pounding on the bleachers, cheering as loudly as they can to support their team. Parents are watching attentively, hoping their kids play their best game. However, among the sea of fans in attendance, one fan stands apart from others. He sits alone staring intently at the game. This man is perhaps one of Paly’s most dedicated fans, attending almost every Paly game for nearly 20 years. His name is Dan Starrett (‘85), although most Paly students know him as Superfan Dan.

Starrett attends numerous Paly games each season for almost every sport. His school spirit and dedication to Paly athletics has been recognized by many parents and athletes who watch him give advice and cheer for the players at almost every game. Although most Paly athletes are acquainted with Starrett through his constant presence at athletic games, not many students know his background story and what sparked his passion for high school sports.

Starrett graduated in the class of 1985 at Paly. During his high school years, he claims that he was not that interested in Paly sports and was nowhere near as spirited and dedicated as he is now towards the athletic program.

“I was not a big fan back then,” Starrett said. “I wasn’t into that sort of thing [in high school], but my interests changed over time… I started being a fan eight years after I graduated.”

Starrett blossomed into Superfan Dan, not because of a sudden interest in sports nor connections with the Paly athletes. He was facing challenges in his life, which resulted in him turning to high school sports for a newfound joy.

“Family crisis struck in August of ‘94,” Starrett said. “The previous school year I had been a fan, but that’s what pushed me into [being a fan] big time, as a way of overcoming grief. … It helped me get over the suicide of my dad.”

Starrett’s mother, Pat Starrett, is happy that her son found something he is so passionate about, because she understands it gives his life joy.

“We had a situation in our family, and there was a lot of grief, and his father died,” Starrett said. “He started going to the games to have a good distraction and it [became] part of his life. It was something he really enjoyed doing.”

Still grieving his father, Starrett decided to attend the Central Coast Section track meet at San Jose City College in 1995. According to Starrett, it was here where he discovered his joy in attending Paly games. Starrett loves to support the students and their passions by going to all of their games. For him, it is less about the sports and more about supporting the students.

“I’m a fan because I love high school students,” Starrett said. “Rooting for the sports is my way of showing my love for the students.”

Starrett also believes that showing encouragement to others and cheering for student athletes make him a better person and improves the value of his life.

“It gives meaning to my life when I support others,” Starrett said. “It’s a good quality [and] it beats being selfish.”

Going to Paly games slowly helped Starrett recover from the loss of his father and helped him get on with his life. The excitement of the games and his love for high school students distracted him from his sadness so he continued to attend the games. As he cheered for the athletes and became a more prominent member of the Paly athletic community, he overcame the sadness of the family crisis and focused on his positive support for the students.

“It made me forgetful and kept me from being overcome [with] self pity and [falling] apart,” Starrett said. “It [helped me] get over it very quickly and get on with life and [Paly games] gets me off [myself] and into things again.”

According to Starrett, his favorite sports at Paly are cross country, track, water polo, swimming, soccer and lacrosse. However, he is witnessed at almost all the games for most of the sports at Paly because he wants to make sure he shows support for all of the athletes.

Starrett often sticks around after the games to congratulate the players on their success or just to socialize with them. Zac Rosenbaum (‘14), a player on the varsity boys’ lacrosse team, recognizes Starrett’s enthusiasm in the sport of lacrosse. According to Rosenbaum, even parents love Starrett and will sometimes offer him a snack after the lacrosse games.

“Dan’s always a really supportive guy: a good influence on the sidelines,” Rosenbaum said. “He likes to go around and give us high fives before the games and listen to our pregame speeches. A lot of the time the coaches will say, ‘Try to win it for Dan.’”

Starrett’s support not only extends to home games, but also to away games as far as 2-3 hours away.

“He’s a die hard fan,” Rosenbaum said. “He goes to all our away games.”

Rosenbaum also believes that his teammates find joy in seeing him at all of their games.

“My team always greets Dan when we see him and thank him when he wishes us good luck,”
Rosenbaum said. “We even take photos with him sometimes.”

Bowen Gerould (‘14), player on the varsity baseball team, is also impressed with the amount of baseball games Starrett attends during the season. According to Gerould, Starrett not only cheers for the players, but also gives them advice such as “aiming for the gap” when they’re up to bat. Starrett also goes to some of the away baseball games and has traveled the two hour drives to Carmel and Campolindo to cheer on the Paly baseball team.

“Dan is easily our most supportive fan,” Gerould said. “He is at every game and even went so far as Carmel to watch us last year. Most parents didn’t even do that. He always has something nice to say about us after each game.”

In appreciation of his constant presence at Paly baseball games, the team invited him to attend their end of season baseball banquet at the Gerould family’s home. Gerould thought he deserved the invite and was glad to have him at their dinner.

“It meant a lot to him,” Gerould said. “I’m glad he came. It was nice to have him there and it was the least we could do for his ongoing support.”

Gerould also believes Starrett’s support at the away games gives the team some motivation because he goes to the effort to drive to the games no matter the distance.

“When he comes to away games, he motivates us because sometimes he is one of the only fans there to watch us even though he doesn’t have an obvious connection to the team,” Gerould said. “He is disappointed when we lose, just like we are, so we try to get the win to make everyone happy.”

According to Starrett, Paly athletes appreciate his support when he comes to their games because it gives them motivation and spirit. Starrett believes his presence sometimes help them play better against competition.

“I see a wide range of responses to my support system,” Starrett said. “I’m grateful for it. Athletes tell me when they’re running they say that when I say to run faster or it just helps [them] play better and inspires them and gives them an extra motivation that they wouldn’t have if I was not there.”

One may wonder why Starrett is always at high school athletic games instead of dedicating his time to college or professional sports. Starrett feels that in college sports you cannot connect with the players as much as high school. Professional and college athletes are separated from the fans during and after the games so one never really learns who the players are as people. In high school however, most student athletes love attention from fans.

“You can congratulate the athletes more [in high school sports],” Starrett said. “They’re not as fenced off as they are at college [and] professional [levels] so you can interact with them. It’s a lot more personal and you can talk to parents. It’s really easy to do that sort of thing in high school sports. If you’re in a college crowd it’s a lot bigger and you don’t make as much of a difference. You don’t stand out as much.”

Starrett also has a preference for attending high school sport games instead of middle school and younger because they are more mature and easy to talk to.

“The last couple of years, [Dan] has been at some of the bigger wrestling tournaments away, one in Gilroy and one in Fremont,” Duran said. “He came to some of the frosh-soph and JV tournaments as well, and he has been to many of the JV football games.”

Duran also invited him to the wrestling banquet, to thank him for his passion for the team.

“It’s nice to have him there, especially more on the road,” Duran said. “He likes coming, and I hope he keeps coming.”

According to Duran, Starrett is supportive of the teams, win or lose. Because Dan is consistently present, Duran believes that the Paly athletes think highly of him and look forward to seeing him.

“They expect to see him now because hes been around so much,” Duran said. When he’s not there, [players] usually ask. The kids look forward to seeing him.”

Usually when Starrett is spotted at Paly games, he is not with his family. In fact, his family overall does not find the same kind of entertainment in high school games as he does.

“My family is more into college and professional sports,” Starrett said. “But I do have an uncle in North Carolina who goes to his local high school sports like me. My mom has been several times over the past few years but in general [she] doesn’t come. She retired recently and plans to come to more stuff.”

According to his mother, Starrett has many hobbies besides attending Paly games including spending time with his friends and brothers, writing, helping high school teachers grade papers and working as a special education aid for Palo Alto Unified School District. Starrett is also active in a local political organization and works at voting polls.

“He’s a very intelligent man and he enjoys his life,” his mother said.

Starrett also believes that the spirit and excitement of high school games motivate him to participate in other activities in life and pursue his goals.

“It’s a great way to be inspired to do other things in my life,” Starrett said.

Despite his busy schedule in his personal life, Starret rarely misses the chance to watch Paly athletes play. Paly games foster an environment full of support and excitement for Starrett. The games give him something exciting to look forward to.

“I love high school students and [going to their games] helps give my life meaning and joy,” Starrett said.

Starrett also loves the feeling of being a part of a community as strong as that of Paly’s. His constant encouragement and support inspires many athletes to be more passionate and diligent in their games and life in general. Supporting the athletic teams is one of his passions and it gives his life more excitement.

Superfan Dan’s constant support for the players encourages them

Tori Destefano is a senior who enjoys playing softball for Paly. In her spare time, she loves to hang with friends and play sand volleyball.