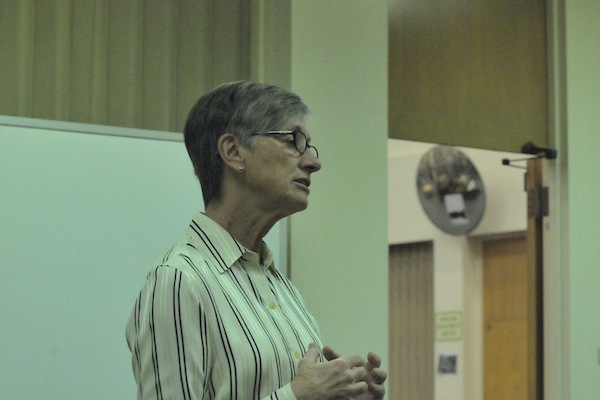 Marlene Bjorsrud speaks to Paly athletes about the importance of women in athletics. "We need to ask what our work in the world is," she said.

Marlene Bjornsrud, winner of the International Olympic Committee’s Women and Sport Award for the Americas for 2013, presented on women in sports at Paly today.

“No one plays a sport with any desire but to be successful,” Bjornsrud said.

A teenage girl in Colorado Springs in the 1960’s, Marlene Bjornsrud was denied the ability to compete in organized sports. Aside from cheerleading and pep club, women were unable to participate in athletics at a high-school level.

“In the 60’s, there were no sports opportunities for girls,” Bjornsrud said.

Playing tennis her whole life, Bjornsrud continued her involvement in women’s athletics when she became the head women’s tennis coach at Grand Canyon University. After moving up to assistant athletic director in 1981, she took the same position at Santa Clara University in 1996. When Brandi Chastain ripped off her jersey at the 1999 World Cup, it became a huge universal stepping stone for women in sports.

“Brandi said, that moment was a huge ‘yes I can’ moment,” Bjornsrud said.

After the World Cup, Chastain began working with Bjornsrud and Foudy in finding ways to involve women in sports as well as their communities.

Bjornsrud stresses that being an athlete is so much more than one’s accomplishments and statistics,

“Athletes should ask, ‘what can we do this season that’s bigger than ourselves?’,” Bjornsrud said.

Since its’ initial launch in 2005, BAWSI has worked with over 3,000 female athletes and engaged over 16,000 students. Through local and national initiatives, Bjornsrud’s organization continues to empower women involved in sports in order to create a positive change throughout the world.

“Think how the world would be if we [women] had a stronger voice,” Bjornsrud said.