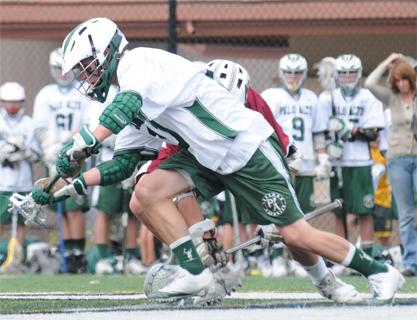 Attack John Brunett (’11) wins the faceoff against the Gators.

The first quarter began evenly with both teams scoring early on.  The majority of the 12 minute period being was played with a score of 1-1 on the board. Then, with about three minutes left of play the Gators put away a goal to make the score 1-2. The Vikings responded with two minutes of relentless attack.

Attack Zach Spain (’11) quickly found the back of the net after a check by defender Gabe Landa (’12) won the Vikings possession of the ball. Spain was closely followed with goals coming from attack Cory Valenti (’11) who was assisted by attack John Brunett (’11) as well as a point coming from midfielder Skyler Anderson (’13) assisted by midfielder Matt Lam (’12) in the last 7 seconds of the quarter. The score at the end of the period was 4-2.

The Vikings did not let up in the second quarter, scoring five goals and only allowing one. Valenti added his second and final goal of the night and was aided by attack Kevin Proceviat (’11) who had two goals in the quarter as well as midfielder Walker Mees (’13) and attack Jonny Glazier (’13).

The Vikings cooled off on attack in the second half but managed to stay tight on defense allowing no goals to be scored in the 24 minutes of play. Although adding only three more goals to its nine, Paly players Spain, Mees and Glazier each contributed one more goal on the night to close out the game 12-3.

“The offense had the energy,” head coach Craig Conover said. “The theme has been every game is four games. We have to win all four quarters and that’s what we did today.”

Next the Vikings will take on Mountain View High School in SCVAL Semifinals. The team suffered an emotional 13-2 loss to the Spartans last Wednesday and are coming out hungry for revenge.