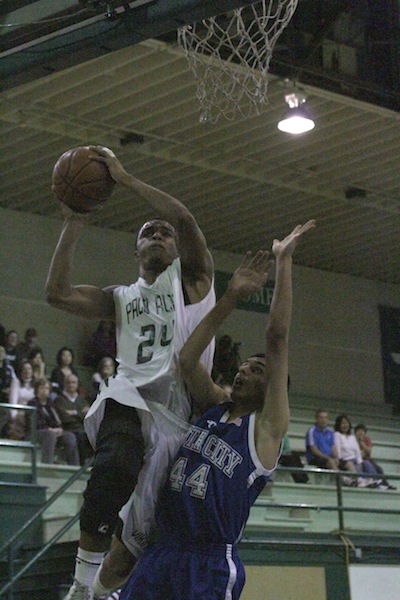 E.j. Floreal ('13) soars up for two against a defender. Floreal had 23 points on the night.

The Vikings started quickly with a three-pointer by Aubrey Dawkins (‘13), but South San Francisco promptly answered to tie it up at three points apiece. The Vikings then went on a 6-0 run, with several fast break baskets, to push the score to 9-3 with six minutes left in the first quarter.

The teams traded baskets a few times before the end of the quarter, but more notably, Floreal was forced to leave the game with a finger injury. He, however, returned to the game moments later. The Vikings led 24-17 at the end of the first.

After leading by more than 10 points during the first quarter, Paly lost momentum in the second. After two free throws and a steal that led to a fast break lay-up, South San Francisco cut the deficit down to three points, getting the score to 24-21. After trading baskets the Vikings were able to pull ahead thanks to a Schmutz free throw and a Floreal lay-up that resulted in an “and one” for Paly. With four minutes left in the half the Vikings led, 29-24.

The momentum changer came with 3:55 left in the quarter when Israel Hakim (‘12) leapt out of nowhere to block a South San Francisco shot. The block led to a fast break that lead to a Floreal lay-up. Then with 2:07 left, Aldis Petriceks (‘13) got a rebound and passed to Wong, who then passed to Dawkins for a long range three-pointer to put Paly up 36-24.

After a South San Francisco lay up, Wong got another assist by passing to Petriceks who sunk a three-pointer. On the ensuing possession Petriceks secured a steal and passed it to Dawkins on the fast break. Dawkins got fouled as he shot but made both free throws to put Paly ahead, 41-26. After two South San Francisco free throws the quarter ended with Paly out in front, 41-28.

The Vikings came out firing as the third quarter began. After a defensive stop and quick offensive ball movement, Floreal scored the first points of the half with a lay-up. South San Francisco got the ball back and off an inbound play got a foul and free throw, before the Vikings came roaring back on offense. Following a Wong miss, Floreal secured a rebound and laid the ball back in the hoop for another two points. At this point Paly went on a 2:30 minute scoring drought.

South San Francisco picked up the intensity and scored two baskets back to back and playing stifling defense, which kept Paly’s high powered offense at bay until with 3:58 left in the quarter Dawkins threw an alley-oop to Floreal who dunked, making the score 47-33 Paly. South San Francisco was quick to respond making a three pointer and getting a steal that led to a lay-up that cut the Paly lead to 10.

Floreal once again halted the South San Francisco momentum by throwing down a hard alley-oop dunk from Schmutz with 2:56 left in the quarter. He then went on to secure a rebound and take it coast to coast for another lay up. South San Francisco and Paly went back and forth on the scoring for the rest of the quarter before Schmutz was able to drain a three-pointer and Dawkins made another jump shot to put the Vikings ahead 55-39 at the end of the third.

The fourth quarter opened up with a South San Francisco lay-up after only 10 seconds, but Schmutz responded by sinking another three pointer. Dawkins then added to the point differential by making a deep three from the corner with 5:50 left in the game. With the Vikings up 62-41, Schmutz missed a three but Floreal was there to get the rebound and put back a lay up. On two back to back possessions the Vikings scored another lay up and got a steal that led to a fast break basket. South San Francisco was only able to score two more points until there were only four minutes left in the quarter, at which point Paly led 68-43.

As Paly’s starters began to find their ways to the bench South San Francisco scored seven unanswered points to make the score 68-50. Their high energy press gave Paly problems for the rest of the fourth quarter. As the quarter wound down both teams were able to score two more points. With the game over Paly stood victorious 70-52.

Dawkins and Floreal were the Vikings’ leading scorers, scoring 21 and 23 points respectively. However, even with such impressive performances the Vikings still have things that they need to improve on. The team had 20 turnovers on the night and had problems handling the pesky South San Francisco press.

After the game Paly Coach Adam Sax reflected on the abundance of Paly turnovers.

“When we pushed the ball we did a much better job scoring, got a lot of lay ups.” Sax said. “When we walked it up we struggled a lot in the half court. I think a lot of our turnovers were forced we were trying to throw the deep pass, some bad post entry passes that we are going to need to clean up for Saturday. We just weren’t strong with the ball.”

Despite the problems the Vikings are proud of the win and excited to move forward in the playoffs.

“It was a good win.” Dawkins said. “Probably the most important game of the season. We just need to be smarter overall and key in on the little things on both offense and defense.”

Moving forward the team will play St. Francis, on Saturday in the CCS quarter-finals.