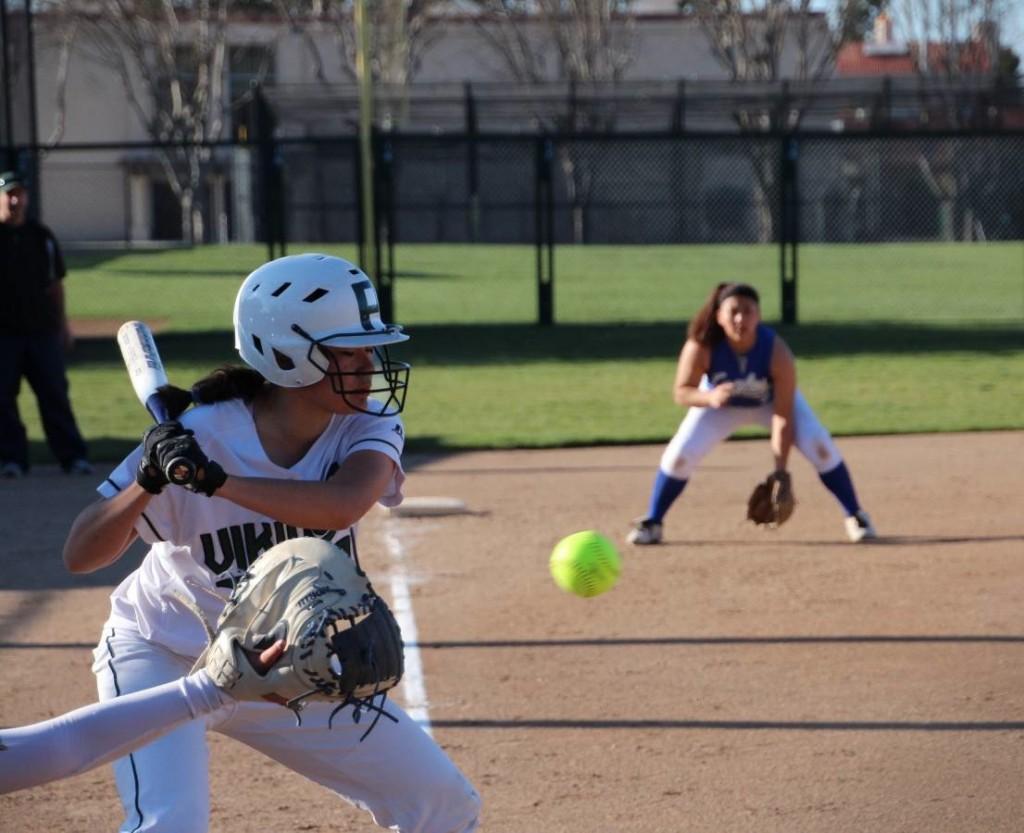 Catcher Rachel Day ('13) goes up to bat for the Vikings. Day got walked twice on the night.

As the home team, the Vikings took the field with Julia Saul (‘14) pitching while the Eagles started at bat. With the help of an error and two walks, Los Altos loaded the bases and scored on an error, making the score 1-0. In the bottom of the first inning, the Eagles walked Casey Glassford (‘15). Anna Rizza (‘13) bunted and advanced Glassford to third base, but was thrown out at second. Maya Padilla (‘13) hit a single knocking in Glassford from third, tying the score up at 1-1.

In the top of the second, with the bases loaded, Saul walked in a run, making the score 2-1 for Los Altos. After letting up three more runs, Paly head coach John Saucedo made a pitching change and put in Glassford. With the bases still loaded, Paly let up two more runs off of an error resulting in a 7-1 lead for Los Altos. The Eagles brought in another run off of a fielder’s choice, and Glassford finished off the top of the second with a strikeout at a score of 8-1. In the bottom of the second, the Lady Vikes weren’t able to score, leaving two stranded.

With a runner on third and one out, Los Altos knocked in another run with a single to right field. Catcher Rachel Day (‘13) fumbled the ball, resulting in another run for the Eagles making the score 10-1. The Eagles then held the Vikings to another scoreless inning.

After solid pitching and defense by both teams, the score remained unchanged going into the seventh and final inning. Los Altos had a lead off double and a pop-up advanced the runner to third. A bunt by the Eagles brought the runner home, making the score 11-1. After two singles and an error, Los Altos loaded the bases and Paly walked in a run, leaving Paly at a 12-1 deficit. The Lady Vikes were unable to score in the bottom of the seventh, leaving the score a final of 12-1 for Los Altos.

“I feel like we weren’t pulling it together,” Saul said. “I think we’re a good team and we just need to improve for the remaining games of the season.”

The Lady Vikes will take on Mercy at Mercy Burlingame on Friday Mar. 9 at 3:30 p.m.