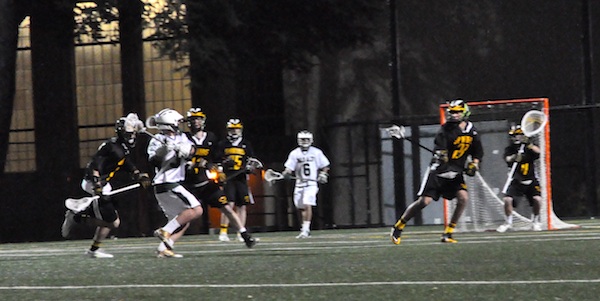 Kris Hoglund (’12) takes a shot for the Vikings. Hoglund had a game high of four goals.

The Vikings lost to the Spartans in three close matches last season, and the victory is a decisive start to what may prove to be an excellent season.

“It really felt good, we were amped up for this, we knew we had to take them out,” Paly head coach Craig Conover said.

In the opening minutes of the game, Mountain View came out firing on the Viking defense. Paly’s defense held strong through the offensive pressure, and goalie Andre Kouchekey (’13) came up with vital saves from the start of the match to keep the Vikings in the game. The game finally opened up when four minutes in, Kris Hoglund (’12) tore down the field and ripped a shot past Spartan goalie Pierce Philp (’12). Mountain View tried desperately to come up with a response but their attempts at the Viking goal were futile in the face of Kouchekey.

“Kouche[Kouchekey] just really stepped up, it was amazing,” Conover said. “He is really excited to be in the goal and he’s kinda making it up as he goes, but he’s excited and sometimes it just takes that to get the job done and hes doing it.”

Paly found the back of the Spartan net once more when Gen Murphy (’13) found an opening and ripped a shot taking the team to a 2-0 lead. With the clock running down and the ball in Mountain View’s possession, Paly defense momentarily faltered and Tyler Myers (’14) was able to sneak the ball past Kouchekey with eight seconds left in the quarter putting the Spartans on the board.

However, Paly came out with momentum in the second quarter, firing shots at Philp straight from the whistle. A Hoglund shot hit the post while a second was saved and Matt Lam (’12) hit a shot just wide within two minutes of the quarter’s start.  Mountain View looked to penetrate past Viking defenders but with little success. The Vikings too seemed to be struggling to find the back of the net as shots from Jonny Glazier (’13) and Hoglund flew wide.

The Spartans then took advantage of a power play when Jordan Gans (’14) was sent to the penalty box for two minutes. Mountain View’s Sam Brigham (’12) found the opening and powered the ball into the goal, tying the game up. The strains of the tense rivalry between the teams began to show as more and more players were sent to the penalty box. During another power play, Myers scored his second goal of the game, putting Mountain View ahead by one for the first time on the night.

Hoglund was quick to respond and in a flash had caught a pass from defender James Harrison (’14), took on the Spartan defense and with two minutes left, tied the game up once more, 3-3. The team was quick to follow Hoglund’s example and the final two minutes were dominated by the Vikings taking shots on Mountain View’s goal. The half ended with the teams tied.

As the third quarter began Paly’s persistent attack continued. Lam lofted a pass to Glazier who finished the play with his second goal of the game, and took back the lead for the Vikings, 4-3. The Spartans retaliated after being caught up on defense when Zach Baier (’12) scored to once again tie the match with eight minutes remaining in the period. Tully Mccalister (’14) stepped up for Paly, scoring a goal of his own to take back the lead almost immediately.

Then, Gans found Skyler Anderson (’13) in front of the Spartans goal and Anderson widened the gap by flying the ball past Philp, the Vikings had a two goal lead for the first time since the first quarter, 6-4.  The rest of the quarter was marked by aggressive back and forth play between the teams and minimal scoring until, with a minute left, Hoglund completed a hat trick, 7-4 Vikings.

The fourth quarter was Mountain View’s final chance to secure its fourth victory in a row against Paly, but the Spartans were continually stumped by outstanding goal keeping from Kouchekey. Lam frustrated the Spartans even further when, with six minutes remaining, he capitalized off a pass from Glazier, doubling Mountain View’s score, the Vikings lead 8-4.

Jake Butters (’14) tried to close the gap for the Spartans scoring his first and only goal for the night, but his efforts were not enough.  Hoglund ended the night for the Vikings as he had started it, scoring one final goal, leading his team to a 9-5 victory.

“Tensions are high just because of the rivalry but we came through, we pulled it together and we finished strong,” Kouchekey said.

The Vikings will face off against  Los Gatos at Los Gatos next Thursday at 7:00 p.m.

“We  are not worried about the season now if we can just keep this sort of momentum,” Conover said.