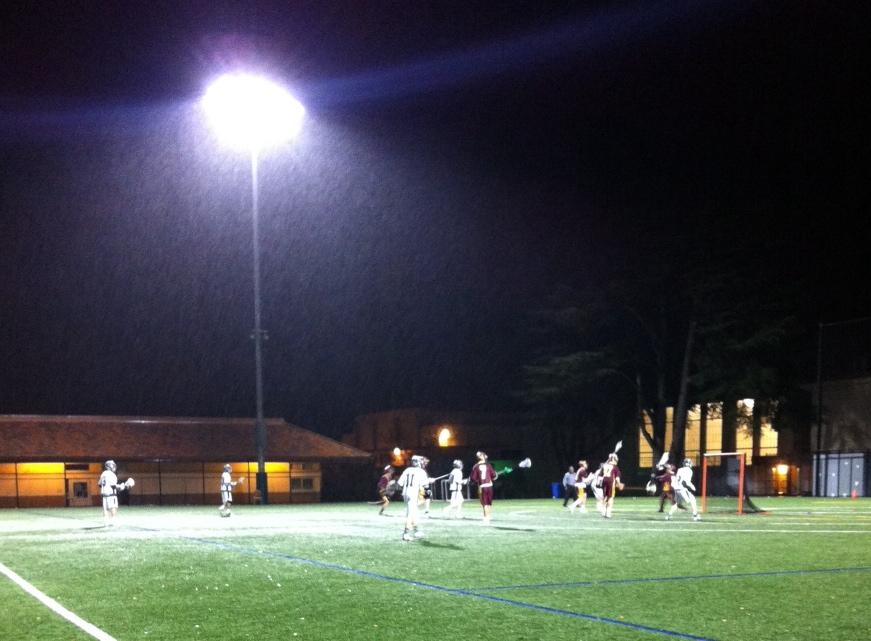 Skyler Anderson ('13) drives to the goal. Anderson had 6 points for the Vikings, 4 goals and 2 assists.s

Following three consecutive losses in the week prior, the Vikings began boldly with two successive goals, one by Zach Levitan (‘15) and another by William Hare (‘14).

M-A immediately retaliated with a deep shot. The Vikings battled for the next goal, but missed the frame as M-A blocked a Viking attempt. The Bears rebounded with another goal, tying the game at 2-2, with 4:39 minutes left in the first quarter.

Paly retrieved the ball off the draw, transitioning between midfielders Kris Hoglund (‘12), Jordan Gans (‘14), and Matt Lam (‘12).  After connecting multiple passes, the Vikings finally locked the ball in the net with two minutes left.

Though the second period commenced as the downpour intensified, the Vikings came off the first quarter break ready to play with Lam scoring in the first 30 seconds.

Twenty seconds later, the Bears struck back by winning the draw control and scoring a goal.  M-A proved relentless when finding an unexpected opening in the Paly defense, scoring yet another goal.

Down for the first time in the game, 4-5, the Vikings came back, scoring five consecutive goals to finish off the quarter. Hoglund started off the streak with a goal, then proceeded to assist on the following possession to Gans, who brought the score to 7-5.

Lam scored his second goal of the period, after which the Bears called a time-out. In a fast paced three minute period, both teams played strong defense, trading possessions. Finally breaking the rallying, low attack Hare scored another goal.

The Vikings ended the first half with Hoglund’s interception and feed to Skyler Anderson (‘13), leaving the score at 9-5.

Coming off of the half time break, M-A stepped up their game, scoring the first two goals.  As Paly attempted to regain control, M-A received a penalty, and the Vikings took advantage of their man-up situation, scoring three goals. The Vikings looked to slow the pace of the game, and found low attackman Anderson, who scored two of the three goals.

According to head coach Craig Conover, Anderson had a stand-out performance.

“Skyler had a great game, [he] had four goals and two assists,” Conover said.

The third quarter came to an end with a final goal from M-A, scored with seven seconds remaining. Paly maintained the lead going into the fourth quarter, 12-8. 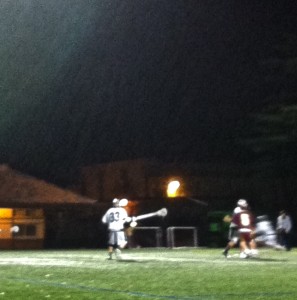 The Bears scored the first goal, but failed to continue the intensity for the remainder of the quarter. In a six minute lag, both teams were unable to complete their shots and connect on crucial passes.

To break the scoring lull, Hare scored another shot for the Vikings, bringing the total to 13-9 with four minutes left.

The Vikings continued this aggressive attack, scoring two more goals in the next minute, one of which was assisted by long-stick defender James Harrison (‘13) to Tully Mccalister (‘14).

In their last attempt of redemption, the Bears took a final point, bringing the final score to 15-10.

Conover felt that the new offensive formations led to their success.

“[They played] as good as they’ve ever played,” Conover said.

“We moved the ball a lot better than we have in the past,” Hoglund said. “I think we executed really well.”

The Vikings will face Menlo high school this Thurs. 29 on Knight’s turf, looking to redeem themselves from a tough loss in the 2011 season.