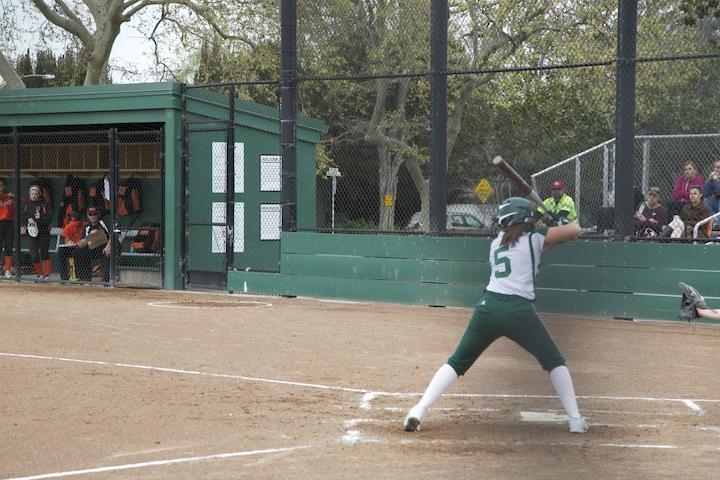 Casey Glassford ('15) prepares to hit the ball. Glassford had two strikeouts in the 1-12 loss to Woodside

The Palo Alto High School Vikings softball team took on the Woodside Wildcats on a cloudy Tuesday afternoon, but the Vikings were unable to win the game, losing to the Wildcats 1-12.

Starting pitcher Casey Glassford (’15) struggled to find her rhythm early in the first inning, walking the first batter of the game and giving up a single to the following Wildcat. A collection of errors from the Lady Vikes lead to Woodside taking the early 0-1 lead in the first. Another single by the Wildcats added to their lead, taking it to 0-3. Another error by the Vikings lead to the Wildcats building themselves a 0-5 lead in the first. Woodside scored again, taking the score to 0-6, off of a hit-by-pitch by Glassford. The Vikings then gave up a 3 RBI triple to the Wildcat’s catcher, giving the visiting team the 0-9 lead after the 1st.

The bottom of the 1st was a 1-2-3 inning for the Vikings, who were unable to get on base. Maddy Jones (’15), starting in right field, caught a fly ball to get the first out of the 2nd for the Vikings. A force out on 2nd got the 2nd out, and Glassford was able to field a ground ball and get the out on 1st to end the 2nd. Another 1-2-3 inning for the Lady Vikes ended the bottom of the 2nd.

A line drive catch by Jesse Kim (’16) gave Palo Alto the first out of the 3rd but Woodside responded with a line drive double. Glassford responded herself, striking out the next batter. Woodside attempted to steal with a person on 2nd and two outs, but Maddie Martinson (’16) caught her to end the 3rd inning.

Another 1-2-3 inning by the Vikings ended the 3rd. Maggie Renteria (’17) got the first out of the inning for Palo Alto via a force out at 2nd. Glassford then struck out the next batter, her second of the game. She then caught a shallow pop out to bring up the Vikings to bat.

Martinson was able to get the walk in the 4th, but Palo Alto was unable to capitalize on the opportunity. Woodside started off the 5th with a base hit up the middle, but Mackenzie Glassford (’17) made the double play to put two outs on the board.

Autumn Macreno (’15) made the popup catch to end the half inning. Macreno was walked with 2 outs, and Julianna Heron (’15) knocked her in with a double to put the Vikings on the board, 1-9. Natalie Snyder (’16) hit a blooper over the third baseman, but the inning ended after Kabria Dame (’15) popped out.

The Wildcats responded with a double from the first batter. Mackenzie Glassford took over pitching duties from her sister and immediately got the out. She then gave up three more runs to give Woodside the 1-12 lead. Afterwards, she caught the line drive and threw to first for the double play to end the inning. A 1-2-3 inning by the Vikings ended the game.

Casey Glassford believes that, despite the first inning, the Vikings had some good moments that they can learn from.

“It’s hard because you would hope after four games the jitters would be out, but it is better to play like this before league starts. Hopefully we’ll do better once league starts.”

The Vikings’ next game is against Lincoln in Palo Alto, Friday, March 13th at 4:00 PM.